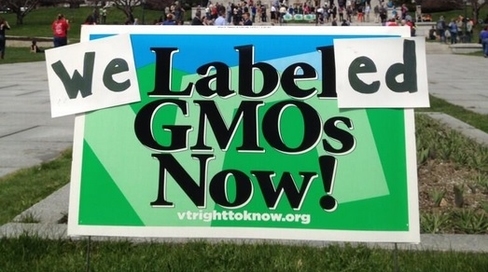 April 27, 2015 (Washington, DC)--Today, Center for Food Safety (CFS) hailed the just-issued federal court decision from the U.S. District Court for the District of Vermont affirming the constitutionality of Vermont’s genetically engineered food labeling law, Act 120. The ruling fully denied the preliminary injunction motion brought by the Grocery Manufacturer’s Association, Snack Food Association, and other plaintiffs to try and halt the law’s implementation, and granted the State of Vermont’s motion to dismiss on several claims.

“This important ruling affirms the constitutionality of genetically engineered food labeling, as well as the rights of Vermonters and U.S. citizens across the country,” said George Kimbrell, senior attorney for Center for Food Safety and counsel in the case. “Americans are demanding the right to know if their food is produced through genetic engineering, for health, environmental and many other reasons. This decision is a crucial step in protecting those rights.”

"What a victory for Vermont consumers," said Paul Burns, executive director of the Vermont Public Interest Research Group. "From the beginning, we have said that Vermonters have substantial interests in knowing whether their food has been genetically engineered. This ruling brings us one giant step closer to that reality."

Act 120 was signed into law on May 8, 2014. The Grocery Manufacturer’s Association (GMA), which represents the country’s largest food manufacturers and has poured tens of millions of dollars into anti-labeling campaigns in other states, sued Vermont just over a month after the bill was signed into law.

CFS and the Vermont Public Interest Research Group are Amici in the case, represented by legal counsel from CFS and Vermont Law School’s Environmental & Natural Resources Law Clinic, and have litigated in support of the State and defending Act 120 since June 2014 (see for example, here and here). Prior to that, CFS advised the State and Vermont groups on the crafting of the legislation for several years leading up to the law’s passage last spring.  More broadly, CFS has led U.S. public interest efforts to secure the labeling of GE foods for nearly two decades, across the country.  In 2012-2014, CFS co-authored GE labeling ballot initiatives in California, Washington, and Oregon, which all narrowly lost.

Among other decisions, the 84-page ruling by the Court specifically:

*Denied the Plaintiffs’ Motion for a Preliminary Injunction;

*Granted the State of Vermont’s Motion to Dismiss on several grounds, including dismissing claims that Act 120 was preempted by Federal Law, and that Act 120 violated the Constitution’s Commerce Clause, and that the Plaintiffs’ 1st Amendment Claims were subject to strict scrutiny;

*Held in the State’s Favor on the remaining 1st Amendment claims, but did not dismiss the Plaintiffs’ complaint; and

*Ruled that the Plaintiffs were likely to prevail on Act 120’s prohibition on labeling GE food as “natural.”

GMA represents the country’s largest food manufacturers, which already label GE foods all over the world, but have forcefully fought efforts to label here in the U.S., including California, Washington, and Oregon. GMA has also supported a bill in Congress that would preempt states from pursuing labeling laws, even in the absence of a federal standard.