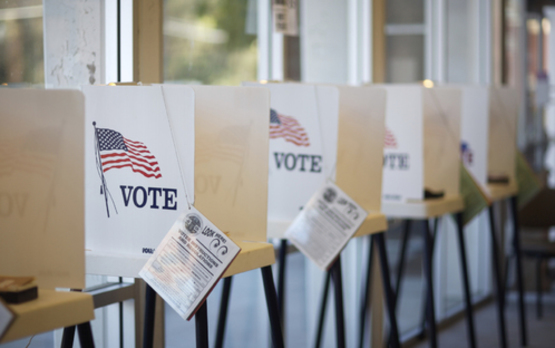 Since the days of Ronald Reagan, the Republican Party has avowed itself the defender of state and local rights in the face of an imperious federal government. From the 1980s on, this doctrine of state control, often called the New Federalism, was hailed as the “devolution revolution” and is at the very heart of conservative and Tea Party rhetoric today.

For House Republicans, this week may be a major test as to whether their devotion to state’s rights is a foundational principle for which they stand, or mere hypocritical rhetoric to be tossed aside when a few major corporations want to improve their bottom line and crush state and local democratic decision-making.

What brings this issue dramatically forward is a bill that the House may vote on in the coming week.  Introduced by Kansas Republican Rep. Mike Pompeo at the behest of Monsanto and other chemical and big agribusiness companies, this bill (H.R. 1599) is often referred to as the “Denying Americans the Right to Know or DARK Act.” As written, H.R. 1599 would have an almost unprecedented impact in negating state and local decision-making. It requires that only federal law can govern issues surrounding genetically engineered (GE) crops, certain farm practices, seed and food labeling, and restrictions on certain pesticide use. The bill would therefore negate over 130 existing state and local level statutes, regulations, and ordinances passed by the legislatures and citizens in 43 states.

This radical federal overreach could permanently take away state and local governments’ ability to enact measures that address a specific locality’s cultural, agricultural, and ecological concerns, issues that have long been recognized as falling under state and local governments’ traditional legislative powers. For the average citizen, this means only the federal government will be able to decide whether we have a right to choose what we feed our children, whether farmers have rights to grow their crop of choice, and whether we have a right to protect ourselves and our communities from dangerous chemicals.  No state, county or municipal decision-making allowed.

This is obviously the very opposite of a “devolution revolution.” Instead of putting more powers in the hands of states and localities, this legislation would drastically reduce their ability to decide on critical aspects of health, farming practices and food safety and security.  So shouldn’t Ronald Reagan Republicans be up in arms against this bill rather than support it?

To understand why many Republicans support this bill and what is at stake, it helps to look back over the last few years where we’ve seen state and local democracies flourishing. Citizens voted in a wide swath of state and local laws that safeguard farmers from economic harms caused by cross-pollination of GE crops, support consumer transparency, protect children from exposure to pesticides, defend against invasive species, maintain seed purity, and preserve crops that hold spiritual and cultural importance.

A GE food labeling law has passed in Vermont, as did laws in Connecticut and Maine, though they require other states to join before coming into effect. Vermont’s law is set to go into effect in July, 2016 despite a federal lawsuit filed by the chemical industry and its allies in an attempt to halt it. Their legal effort failed earlier this year when a federal court held that the labeling law was in fact constitutional and a valid exercise of the state’s authority.

In another example, farmers in Jackson County, Oregon, were concerned that GE crops being grown locally would contaminate their non-GE crops and cost them export markets, as well as premium organic markets. They initiated a ban on GE crop cultivation in the county, which passed by a large majority of Jackson County citizens.  The chemical industry also backed a lawsuit there to halt that initiative, but again lost. A federal judge ruled that the GE crop ban was well within the county’s right to pass.

Other counties have said “no” to GE crops primarily for health reasons. More than 85% of GE crops are designed to withstand massive doses of toxic herbicide and still survive. This technology has resulted in an increase of hundreds of millions of pounds of these chemicals soaking our farmland and food crops.  Even more dangerous is the inevitable resistance that weeds develop to some of these herbicides. To deal with these “superweeds,” chemical companies such as Monsanto and Dow have convinced their government cronies to approve GE crops that will be doused with ever more hazardous herbicides.

Imagine the resulting nightmare: scientists predict that unless these GE crops are banned altogether, hundreds of millions more pounds of 2,4-D (an element of Agent Orange) and dicamba, a notoriously dangerous weed killer, will be sprayed over our land, our water supply, neighborhoods and schools in the next few years.

Some communities are voting “NO.” Along with the Jackson County ban, an additional Oregon county, one county in Washington, five counties in California, and three counties in Hawai’i have placed bans, moratoriums or major restrictions on these crops and the inundation of toxic herbicides that they bring with them, either through ballot initiatives, or through votes by county or city officials. Perhaps the most remarkable story is the battle that took place in Maui County, Hawai’i. Citizens passed a moratorium on all GE crops, defeating an $8 million media campaign waged against the effort by Monsanto and its allies. Do the math on this one:  the opposition spent more than $350 per vote they received -- an amount believed to be the highest ever spent per vote in a U.S. election -- and they still lost!

All of this democracy has been too much for Monsanto and other chemical and Big Ag companies. They are putting a full court press on House Republicans (and Democrats) to pass the DARK Act, spending hundreds of millions on lobbying and campaign financing in an effort to rescind all these laws, trample state and local rights, and crush the democratic decision-making of tens of millions of Americans.

So in the coming days, it is an old story of money versus principle for House Republicans. Will they stand by the New Federalism and the purported very core of their political belief system?  Or will they be “knee pad” conservatives, genuflecting to whatever Monsanto and the other Big Ag well-heeled corporate contributors ask, ultimately sacrificing states’ rights on the altar of corporate donations? For the good of all of us, let’s hope principle wins out this time.