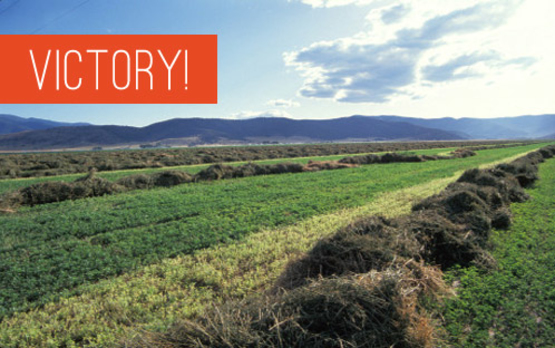 Federal Court Decision Upholding County Ordinance Will Not Be Appealed

Medford, OR – Today a Federal Judge in Oregon approved a consent decree, or court-approved settlement, protecting Jackson County Oregon’s “GE-free” zone, created by an Ordinance that prohibits genetically engineered (GE) crop cultivation in the county. Two GE alfalfa farmers, with financial backing from the biotechnology industry, had challenged the law late last year, saying it violating existing Oregon State law. In May, Federal Judge Mark D. Clarke resoundingly rejected that challenge and instead ruled in favor of those defending the law, the Our Family Farms Coalition (OFFC), Center for Food Safety (CFS), and the County.

“Today’s settlement protects Jackson County’s ordinance from any appeal, and in so doing is another important victory for farmers and the environment,” said George Kimbrell, CFS Senior Attorney and counsel in the case. “GE-Free Zones like Jackson County are important to the future of our food because they allow farmers to grow traditional and organic crops without risk of transgenic contamination. U.S. farmers and consumers have a right to say no to Monsanto’s damaging and pesticide-driven business model.”

Center for Food Safety and Our Family Farms Coalition, which represents farmers growing traditional non-GE crops, became parties in the case earlier this year to defend the law on behalf of local traditional and organic farmers. OFFC helped pass the Ordinance banning GE crops in 2014 in order to protect their crops from contamination by GE crops.

“After years of fighting, farmers like myself can finally go to bed at night knowing our crops will be protected from GE-contamination,” said Elise Higley, the executive director of OFFC.  “It is great to know that the will of the 66 percent of our county’s voters that passed this measure will be given effect.”

OFFC and CFS were jointly represented by legal counsel from CFS and Lewis and Clark Law School’s environmental litigation clinic, Earthrise Law Center. The legal decision focused on the argument that the county Ordinance violated Oregon’s “Right to Farm” law, with the Court concluding it did not. However, the plaintiffs had one remaining claim not yet litigated, asserting that it was a “taking” of their property to have to remove their current crops of alfalfa, for which the county had to pay them compensation.

“This case is important in that it makes clear that farmers growing traditional crops have the right to adopt local laws to protect their crops against GE contamination,” said attorney Lia Comerford with the Earthrise Law Center. “This has always been a David and Goliath battle and we are very pleased Jackson County’s ban on GE crops will stand.”

Under the terms of the consent decree, the two Roundup Ready GE alfalfa farmers in Jackson are allowed to keep their current limited GE alfalfa in the ground, for the remainder of its useful life.  However they cannot plant any new GE crops, and they must take measures to prevent against contamination from their farms.  Most importantly, the plaintiffs have agreed to not appeal the decision, meaning when the few remaining acres of GE alfalfa are removed, Jackson County will be a GE-free sanctuary. In addition, under the terms of the settlement, the plaintiffs are foregoing their remaining “taking” of property rights claim against the county.

On May 20, 2014, the voters of Jackson County overwhelmingly voted to protect local farmers from transgenic contamination by making the county a GE crop-free zone. This landmark victory for traditional farmers was particularly impressive given the amount of out-of-state money (nearly $1 million) poured into the County by chemical corporations to defeat the measure. 150 family farmers and local Granges endorsed the Measure, and it passed by a landslide. In November 2014, however, two farmers growing GE Roundup Ready alfalfa, backed by agricultural biotechnology and chemical companies, challenged Ordinance 635 in court. In May 2015, federal court Magistrate Mark D. Clarke ruled that the Jackson County GE crop ban did not violate Oregon’s Right to Farm law.

A lack of federal oversight of biotechnology in agriculture has repeatedly led to incidents of transgenic contamination, with devastating effects to traditional (non-GE) and organic agriculture. As a consequence, numerous counties in addition to Jackson across the country have created similar GE-free zones. In enacting Ordinance 635, Jackson joined numerous other counties in various states, including California, Hawai’i, and Washington, which have created GE-free zones by regulating GE crops. These efforts continue to grow. For example, a Colorado county is currently considering a similar ordinance in order to protect the region’s unique heirloom corn growers.