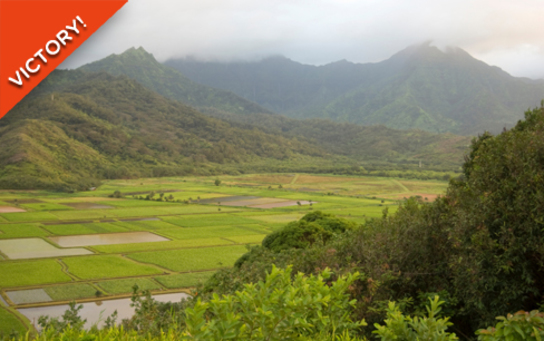 Landmark Your Right to Know Pesticide and GE Ordinance passes in spite of intense industry lobbying, demonstrates strength of the food movement

Today the Kaua‘i County Council passed a new law that would create a new system to protect the public from pesticide exposure and assess the risks stemming from the use of pesticides and the cultivation of genetically engineered (GE) crops. Bill 2491 requires the largest biotech companies to report and publicly disclose the pesticides and GE crops used on the island.  The bill prohibits all pesticide use near schools, medical facilities, parks, and waterways that flow into the ocean, and calls for the County to prepare a detailed analysis of the numerous environmental and health impacts of pesticides and GE crops.   The victory comes despite intense pressure from the agricultural biotechnology/pesticide industry, which has considerable power on the island, as well as attempts to water down the bill from some state officials.

“The people of Kaua‘i have been remarkable in their persistence in the face of corporate power.  The County Council did the right thing by listening to the people and acting in their best interest rather than bowing to multinational corporations,” said Andrew Kimbrell, executive director for Center for Food Safety.

“Center for Food Safety will stand with the people of Kaua‘i.  We are committed to working with allies on the island to defend the bill from any legal interference by the pesticide industry,” continued Kimbrell.

The passage of the bill will ensure that physicians, families and farmers can learn about what pesticides are being applied on the island, as well as what GE crops, and take additional steps to protect themselves from exposure. In addition, pesticide buffer zones near medical facilities and nursing homes, schools and day care centers, parks and shoreline waterways, will help reduce risk of exposure for some of the most vulnerable members of the Kaua‘i community.

Center for Food Safety has been at the forefront of the battle to curtail the dangers resulting from GE crops and pesticides since 1997.  The Center vigorously supported Kaua’i’s landmark legislation, utilizing its legal and scientific expertise through public meetings, testimony, and written comments.

Kaua’i joins a number of other counties across the country that have passed ordinances regulating GE crops.