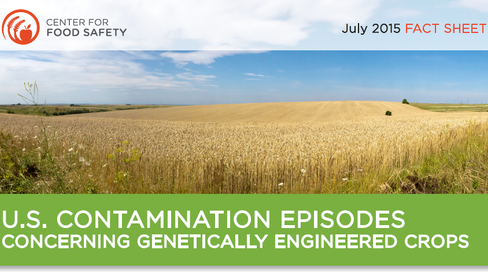 The following are just a few of the dozens of episodes in which pollen or seeds from genetically engineered (GE) crops have contaminated conventional crops, often causing seed or product recalls, and other problems for farmers and consumers. The regulatory mechanisms needed to prevent contamination are either missing or severely inadequate, jeopardizing export markets, farmer livelihoods, and consumer confidence.

2014 According to the National Grain and Feed Association, corn growers in the U.S. lost from $1 to 3 billion in revenue last year after China rejected nearly 1.5 million metric tons of U.S. corn due to contamination with a GE variety, developed by Syngenta, that China has not approved for import. China, the 3rd largest U.S. corn buyer, began importing corn from America’s chief corn export competitor, Brazil, to make up the shortfall, an example of how lax U.S. policies on GE crops harms American agriculture.

2014 The U.S. Department of Agriculture (USDA)announced in September 2014 that unapproved GE wheat was found growing at a university research center in Huntley, Montana, 11 years after being field tested by seed giant Monsanto.

2013 An export shipment of alfalfa from Washington State was rejected after the shipment tested positive for contamination with GE herbicide-resistant alfalfa. The U.S is the primary alfalfa supplier to Japan, Saudi Arabia and other countries that prohibit and/or require labeling of genetically engineered foods. In 2012, the alfalfa market was valued at $1.25 billion and has been growing steadily.

2013 The USDA announced that an unapproved GE wheat variety developed by Monsanto was found contaminating an Oregon farmer’s field. Following significant disruptions to the wheat export market, several class action lawsuits were filed against Monsanto on behalf of wheat farmers.

2009 GE “Triffid” flax was approved in 1998 in Canada and the United States. Canadian flax growers feared that transgenic contamination would ruin export markets, and so had it banned in 2001. Eight years later, in 2009, their fears were realized. GE flax was detected in food items in 30 countries in Europe and Asia. Europe rejected contaminated flax shipments, flax prices plummeted and flax growers suffered considerable harm.

2008 U.S. government agencies announced that the Monsanto Company had notified them that an unauthorized GE cotton variety had been harvested along with 54 acres of commercial cotton.

2006 Bayer CropScience and Riceland Foods reported widespread contamination of commercial long-grain rice supplies, including exports, with Bayer’s unapproved, herbicide-resistant GE rice. Japan immediately suspended imports of U.S. long-grain rice and ordered testing of processed rice products. Many European markets also closed. Because Bayer stopped field-testing the rice in 2001, it was likely in the rice seed supply, food chain and/or the environment for 5 years or more prior to its discovery. In a class action lawsuit, 11,000 rice farmers won a $750 million settlement against Bayer for losses they incurred due to lower rice prices.

2006 EPA scientists announced that golf course grass (bentgrass) genetically engineered to withstand Monsanto’s Roundup herbicide escaped the test plot via pollen flow or seed dispersal to form viable plants up to 2.4 miles away. Bentgrass can cross-pollinate with many different grasses, and 175 permits authorizing cultivation of over 4,400 acres of GE bentgrass have been issued since 1993. The Oregon Department of Agriculture discovered previously unknown populations of the GE bentgrass still thriving in the wild in 2011 and is still working to try to eradicate it.

2004 Biotech giant Syngenta revealed to U.S. authorities that it had mistakenly distributed an unapproved GE corn variety, Bt10, to U.S. farmers from 2001 to 2004, enough Bt10 to plant 37,000 acres and produce 165,000 tons. The episode resulted in numerous rejected corn shipments to Japan and the EU. Bt10 remains unapproved by US regulatory authorities.

2004 In the longest “gene flow” incident on record, genetically engineered bentgrass (see above) was found by EPA scientists to have cross-pollinated conventional grass up to 13 miles away in Oregon. Bentgrass can displace natural grass species in forest and native prairie settings. The U.S. Fish and Wildlife Service found that approval of GE herbicide-resistant bentgrass would likely jeopardize several endangered plant species. Herbicide-resistant bentgrass weeds created by such cross-pollination could also endanger the grass seed industry.

2004 GE papaya trees were discovered to have contaminated both organic and conventional, non-GE papaya on a wide scale. GE papayas have been grown widely in Hawaii since 1998. Just six years later, fifty percent of Big Island papaya seed samples showed GE contamination, including those taken from organic farms and people’s gardens.

2003 UC Davis researchers discovered that, for seven years, they had been mistakenly distributing for research purposes GE tomato seed in place of a conventional variety.

2003 Tests showed that GE crops had contaminated wheat grown in the US, even though GE wheat was not approved for commercial use. Grain industry experts warned that approving GE wheat could mean the end of US exports to Europe and Asia.

2002 Experimental corn genetically engineered as a “biofactory” for drug production, produced by ProdiGene, Inc. of Texas, contaminated soybeans in Nebraska and potentially corn in Iowa. 500,000 bushels of contaminated soybeans worth $3 million were quarantined at the elevator and destroyed, while 155 acres of corn were uprooted.

2001 Scientists were surprised to discover that GE corn has cross-pollinated with wild maize in Oaxaca, Mexico despite the country’s moratorium on GE crop cultivation, in effect since 1998. It is thought that GE corn seed in food aid shipments from the U.S. was saved and planted.

2001 Monsanto was forced to recall thousands of bags of canola seed contaminated with a GE variety not approved for sale to Canada’s major export markets. Incineration was planned for over 10,000 acres of fields already planted with the unapproved crop.

2000 Over 300 food products were recalled due to contamination by a GE corn (StarLink, produced by Aventis CropScience), not approved for human food due to concerns that it might trigger hazardous food allergies. Exports of corn to Japan decreased by 44% in one year. Depressed corn prices triggered huge losses for corn farmers. StarLink contamination was still being discovered in US corn shipments three years later.