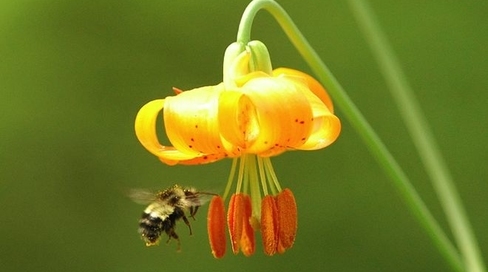 April 22, 2015 (Washington, DC)--Two new studies in the journal Nature today highlight additional cause for concern with neonicotinoids. In one study, researchers from Newcastle University found that honey bees and bumblebees prefer food sources laced with neonicotinoid insecticides, highlighting the potential  neurological effects the chemicals may have on bees’ brains (similar to the effects of nicotine addiction in humans). Attraction to contaminated flowers is particularly alarming given the results of a second study published in Nature, which indicates that neonicotinoid seed coatings pose a substantial risk to wild bees in agricultural landscapes. In that study, researchers from Lund University in Sweden examined impacts from uses of neonicotinoid coated seeds and concluded that the “contribution of pesticides to the global decline of wild bees may have been underestimated.”

“This new research goes a long way to refute industry arguments that harm to bees shown in previous experiments did not reflect realistic conditions. Further work is needed to see how much harm is caused to bee populations over longer periods and larger scales. However, a reasonable level of caution based on this and previous research, and probable harm to other beneficial organisms, dictates ending the use neonicotinoid seed treatments now. This is especially true because substantial research shows that neonicotinoid seed treatments provide little if any productivity gain, and may even reduce productivity in some cases. The only ones that profit from continuing use of these harmful insecticides are the companies that sell them and aggressively push their use,” said Doug Gurian-Sherman, Ph.D., senior scientist and director of sustainable agriculture at Center for Food Safety.

“These new studies show that wild bees may be at even more risk from neonicotinoids than previously thought. There are roughly 4,000 species of wild bees in North America, and since we don’t regularly monitor these species like we do with managed honey bees, harm to their population sizes and health often go unnoticed” says Larissa Walker, pollinator campaign director at Center for Food Safety. “It is estimated that native pollinators contribute more than $3 billion to the U.S. agricultural economy, and they play an integral role in the health of our environment.”

Earlier this month, the Environmental Protection Agency said that it is “unlikely” to approve new outdoor neonicotinoid-pesticide uses until the agency receives new data. But the agency failed to take any action in reducing the number of neonicotinoids already in use on the market – all of which continue to threaten bees and other pollinators on hundreds of millions of acres across the country.

“In light of this growing body of incriminating evidence, EPA must entirely reevaluate the impacts of these chemicals. The longer they wait to take action, the more bees and other vulnerable species will suffer at the expense of regulatory negligence,” said Walker.