Pressure Mounts on White House to Protect Bees from Pesticides 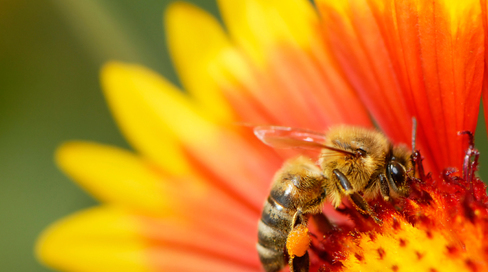 The poll released today was conducted by the firm FM3 and is being distributed in anticipation of recommendations expected from White House Pollinator Health Task Force. Last year, the President charged this inter-agency task force—led jointly by Environmental Protection Agency (EPA) and US Department of Agriculture (USDA)—with implementing a plan to improve the health of bees, butterflies, birds and other pollinating species.

The poll results are clear. “We conducted a rigorous national survey and our findings highlight that Americans are concerned about declining pollinator populations. Policymakers should take these findings seriously,” said Paul Maslin, principal researcher with FM3.

According to the poll, an overwhelming majority (86%) say that honeybees and other pollinators are important to our nation’s food supply. More than half of the survey respondents (56%) consider the declining populations of honey bees and other pollinators to be a serious problem—following only concerns around healthcare costs (76%) and jobs and the economy (75%), and on par with the problem of gas prices (55%).

Furthermore, when asked what is causing pollinator population declines, 70% of respondents felt it was primarily human behavior, including increased use of pesticides.

“This poll shows that a vast majority of Americans care deeply about our country’s dangerous bee declines and they know we can take steps to protect them. The White House has a unique opportunity to respond to these concerns in a meaningful way. They should start by curbing the use of toxic pesticides,” said Andrew Kimbrell, executive director at Center for Food Safety.

Earlier this month, advocates delivered over four million signatures to the White House calling for decisive action on the rampant use of neonicotinoids and similar systemic insecticides, which scientists say are a driving factor in declining bee populations.

Beekeepers agree. They’ve been witnessing the devastating impact of these chemicals on their hives for years, and have been leading the call for federal action. "Beekeepers are on the front lines of the food system, witnessing dramatic bee declines. We're heartened by the growing and diverse groundswell of support and understanding of the critical value of bees and beekeeping, said Jim Doan a New York beekeeper and owner of Doan Family Farms. “It's time for federal officials to take a stand for comprehensive policies that protect bees, tackle pesticides, and ensure the future prosperity of the food system,"

In a letter sent to President Obama and the EPA earlier this month, more than 125 conservation, beekeeping, food safety, religious, ethnic and farming advocacy groups — many of whom were involved in today’s call-in action —pressed for bee-protective policies. The European Union passed a two-year moratorium on three of the most widely used neonicotinoids, yet federal regulators in the U.S. have failed to follow the science and take meaningful action.

Citing public support and a clear body of science, this diverse alliance of groups has remained openly critical of regulatory efforts that fail to sufficiently address the threat pesticides pose to pollinator populations and supports a comprehensive plan to protect bees.

Scientists remain concerned that the White House and task force leaders at EPA and USDA aren’t heeding their concerns, including those expressed in the “Worldwide Integrated Assessment” — a review of over 800 studies by 29 independent scientists released last year that documents significant harms to bees and ecosystems from neonicotinoids.

“The President’s task force should listen to the body of science that links pesticides to bee harm and bee declines,” said Jim Frazier, PhD, an emeritus entomology professor at Pennsylvania State University and commercial beekeeper advisor who specializes in chemical ecology, in a statement. “These systemic pesticides are not only lethal to pollinators, but at low doses can disrupt critical brain functions and reduce their immunity — leaving them susceptible to common pathogens.”

Only days into spring, this week also marks the two-year anniversary of a lawsuit filed against EPA by beekeepers and environmental groups over the approval of two neonicotinoids. That case is ongoing and interested parties are still waiting for meaningful action from the agency.

To date, the most promising federal action is the Saving America’s Pollinators Act, reintroduced this month by Representatives Earl Blumenauer (D-OR) and John Conyers’s (D-MI). The bill would suspend the use of four of the most toxic neonicotinoids until the EPA conducts a full review of their safety.

A summary of the poll results can be found HERE.