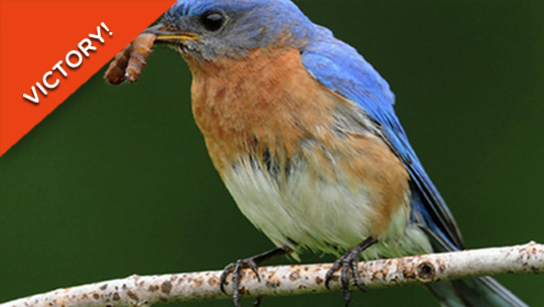 Washington, DC — A federal court has ruled against use of neonicotinoid insecticides (neonics) linked with destruction of bee colonies and other beneficial insects in national wildlife refuges in the Midwest region.  The ruling caps a legal campaign to end the planting of genetically engineered (GE) crops and other industrial agricultural practices on national wildlife refuges across the country.

The federal lawsuit was filed by Center for Food Safety (CFS), Public Employees for Environmental Responsibility (PEER), Sierra Club, and Beyond Pesticides.  It focused on farming contracts for five refuges in four Midwestern states (IL, IA, MN and MO).  The suit sought to force the Fish & Wildlife Service (FWS), which operates refuges, to stop these practices until it completes rigorous analyses of their environmental impacts. In a March 16, 2015 ruling, U.S. District Judge Colleen Kollar-Kotelly ordered:

“The court found that neonicotinoid pesticides so upset the natural balance a refuge is supposed to safeguard that a thorough site-specific environmental assessment is required before these potent agents can be used,” stated PEER Senior Counsel Paula Dinerstein, noting that neonics are now widely used in U.S. agriculture and even in backyard gardens. “While we did not win on all counts, the court found that the Service’s mismanagement of refuges did not always sink to the level of illegality – a very low bar indeed.”

This was the fifth lawsuit filed by CFS and PEER challenging GE crops on wildlife refuges.  Previously, the two groups successfully challenged approval of GE plantings on two wildlife refuges in Delaware, which forced FWS to end GE planting in the entire 12-state Northeastern Region.  Another suit from the groups halted GE cultivation on twenty-five refuges across eight states in the Southeast.

Beset by this litigation, this past July FWS decided that it will phase out the use of GE crops to feed wildlife and ban neonicotinoid insecticides from all wildlife refuges nationwide by January 2016.  This new policy still allows for case-by-case exceptions.

“The decision makes clear that FWS must analyze the specific impacts genetically engineered crops will have on each unique refuge environment before approving them,” said Paige Tomaselli, senior attorney for Center for Food Safety. “FWS can no longer get away with after-the-fact environmental risk analysis on our fragile wildlife refuges.”

Given the recent FWS no-GE/no-neonics policy, the groups do not anticipate the need for further litigation on these subjects. However, they are closely monitoring the ban to ensure it is not honeycombed with exceptions.