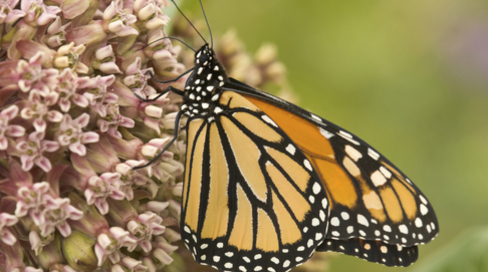 March 17, 2015 (Washington, DC)—Center for Food Safety applauds the 52 Members of Congress who today vocally supported the effort to list the monarch butterfly, which has declined by 90 percent in the last 20 years, as threatened under the Endangered Species Act (ESA). The letter that was sent to President Obama today was spearheaded by Representative Chellie Pingree (D-ME), a long-time advocate for protecting monarch butterflies.

In August 2014, Center for Food Safety and The Center for Biological Diversity, joined by the Xerces Society and renowned monarch scientist Dr. Lincoln Brower, filed a petition with the U.S. Fish and Wildlife Service to list monarchs as “threatened” under the Endangered Species Act and secure stronger protections for this iconic butterfly and its habitat.

“Listing monarch butterflies as a threatened species is essential to their survival,” said Andrew Kimbrell, executive director at Center for Food Safety. “An iconic species is on the verge of extinction because of our chemically intensive agricultural system. This petition is the scientific and legal blueprint for creating the protection that the monarch so direly needs. We thank Representative Pingree for her stalwart support and hope that this sends a strong signal to the Obama Administration.”

In a statement released yesterday, Representative Pingree said, “The loss of habitat and devastation of the monarch population should be a wakeup call.  If we keep applying ever increasing amounts of chemicals to farm lands it's going to have an impact on the environment."

As documented in Center for Food Safety’s recent report, “Monarchs in Peril,” the butterfly’s dramatic decline is being driven in large part by the widespread planting of genetically engineered crops in the Midwest, where most monarchs are born. The vast majority of genetically engineered crops are made to be resistant to Monsanto’s Roundup herbicide, a potent killer of milkweed, the monarch caterpillar’s only food. The dramatic surge in Roundup use with Roundup Ready crops has virtually wiped out milkweed plants in Midwestern corn and soybean fields. In the past 20 years it is estimated that these once-common iconic orange and black butterflies may have lost more than 165 million acres of habitat — an area about the size of Texas — including nearly a third of their summer breeding grounds.

“The monarch butterfly is the ‘canary in the cornfield’ – it serves as a critical indicator species by highlighting larger environmental problems with our chemically-intensive agricultural system. Many species of pollinators, not just monarchs, are at risk if we don’t address the underlying problems with our food system,” said Larissa Walker, pollinator campaign director at Center for Food Safety.

The Fish and Wildlife Service must next issue a “12-month finding” on the monarch petition that will propose protection under the Endangered Species Act.