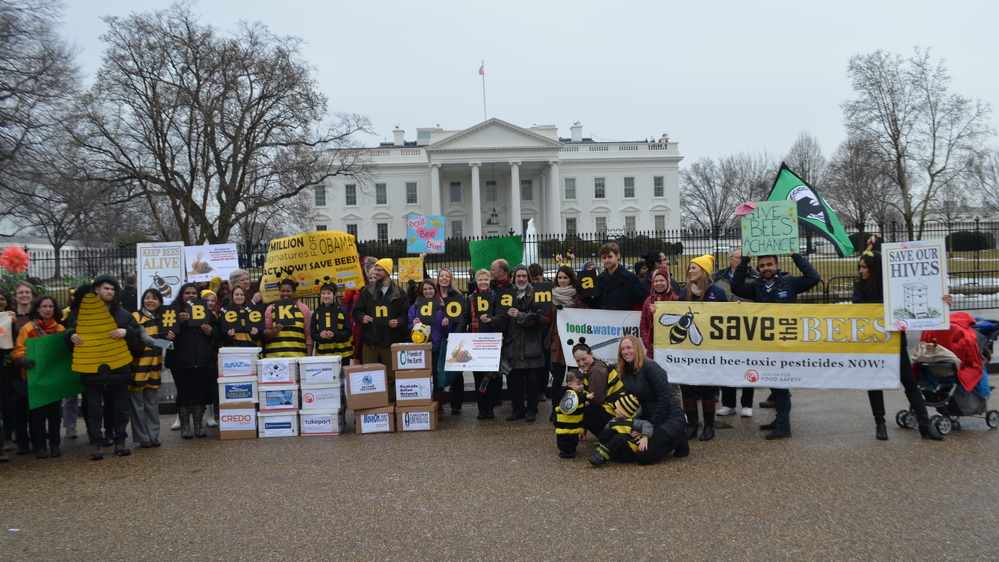 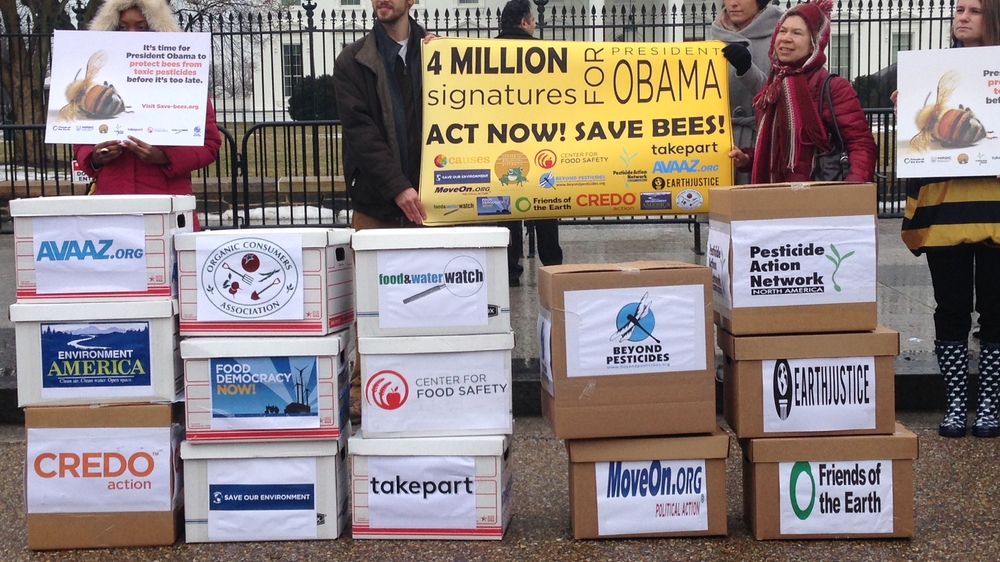 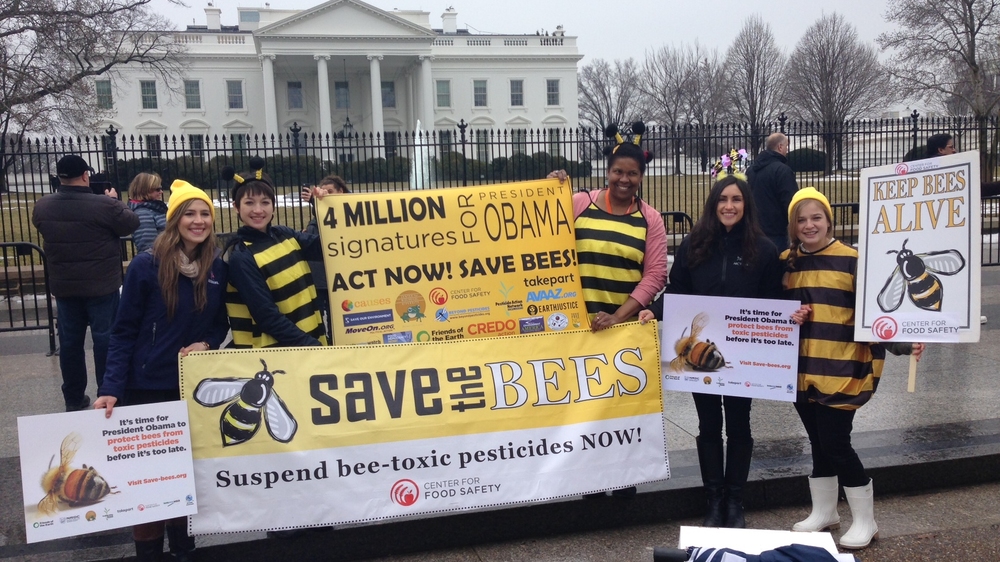 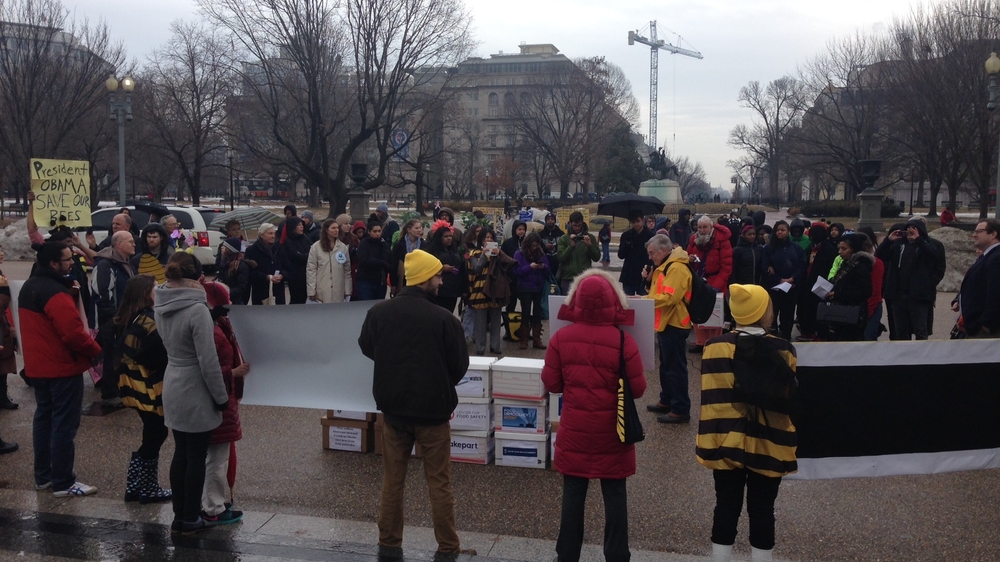 March 4, 2015 (Washington, DC)—A coalition of beekeepers, farmers, business leaders, environmental and food safety advocates rallied in front of the White House and delivered more than 4 million petition signatures today calling on the Obama administration to put forth strong protections for bees and other pollinators. This action anticipates the Pollinator Health Task Force recommendations, expected later this month. The task force, announced by the White House this past June, is charged with improving pollinator health through new agency regulations and partnerships. The assembled groups demand that the recommendations include decisive action on rampant use of neonicotinoids, a class of systemic insecticides scientists say are a driving factor in bee declines.

“Launching a White House Pollinator Task Force gets us on the right track, but more research and habitat restoration alone won’t save our pollinators. We need decisive action on pesticides,” said Larissa Walker, Center for Food Safety’s pollinator campaign director. “We are not going to save pollinators simply by tidying up the edges. We need to delve deep into the problem and root out key culprits, starting with pesticides. We look to the Obama administration for leadership that will have the lasting impact we need to keep our pollinator populations sustainable and healthy. We hope the Task Force’s upcoming Federal strategy announcement will be the catalyst for swift action.”

The rally coincided with both a D.C. metro ad campaign and Representatives Earl Blumenauer (D-OR) and John Conyers’s (D-MI) reintroduction of the Saving America’s Pollinators Act, which would suspend the use of four of the most toxic neonicotinoids until the Environmental Protection Agency (EPA) conducts a full review of their safety.

Representative Blumenauer, said, “Pollinators are not only vital to a sustainable environment, but key to a stable food supply. In fact, one out of every three bites of food we eat is from a crop pollinated by bees. It is imperative that we take a step back to make sure we understand all the factors involved in bee population decline and move swiftly to protect our pollinators.”

“The EPA plans to wait until 2018 before reviewing the registration of neonicotinoids.  But America’s bees cannot wait three more years.  Neither can the thousands of farmers that rely on pollinators,” said Representative Conyers. “Our honeybees are critical to ecological sustainability and to our economy.  I am urging all of my colleagues to please protect our pollinators and support the Saving America’s Pollinators Act.”

“America’s beekeepers cannot easily survive in the toxic environment the EPA has supported,” said Roger Williams, president of the Central Maryland Beekeepers Association, and a speaker at today’s rally. “On top of many other stresses, bee-toxic pesticides, whether used to coat seeds or as sprays, are weakening and killing our bees and threatening the livelihood of the beekeepers who are so intimately tied to our nation's food supply.”

In a letter on Monday, more than 125 conservation, beekeeping, food safety, religious, ethnic and farming advocacy groups urged President Obama and the EPA to take swift and meaningful action to address the impacts of toxic pesticides on pollinator species. The European Union passed a two-year moratorium on three of the most widely used neonicotinoids, yet the EPA has approached the issue with little urgency.

While advocates remain hopeful, they also made it clear that voluntary, unenforceable proposals from the task force are unacceptable. Federal agencies have hinted at continued efforts to promote more of the same -- voluntary farming management practices, insignificant pesticide label changes, and weak state pollinator plans. And advocates contend that without new, meaningful protections, the Task Force may actually do more harm than good.

“Given the historic decline in the population of pollinators — bees, butterflies and birds  —  it is critical that the President and White House Task Force show forceful leadership in addressing all factors contributing to the crisis, with the suspension of neonicotinoid insecticides being a critically necessary action,” said Jay Feldman, executive director of Beyond Pesticides and who spoke at today’s rally.

Neonicotinoids are a class of pesticides known to have acute and chronic effects on honey bees and other pollinator species and are considered a major factor in overall population declines. A growing body of independent science links a class of pesticides called neonicotinoids to bee declines, both alone and in combination with other factors like disease and malnutrition. Twenty-nine independent scientists conducted a global review of 1,121 independent studies and found overwhelming evidence of pesticides linked to bee declines. Neonicotinoids are also slow to break down, causing them to build up in the environment  and endangering a whole range of beneficial species that inhabit these ecosystems.