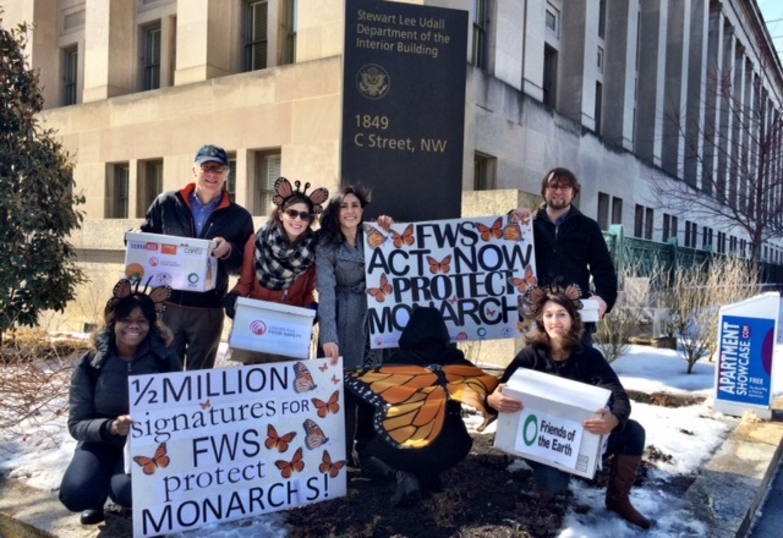 Experts, legislators and public call for iconic species to be protected under Endangered Species Act

WASHINGTON— More than half a million people called on the government to protect the monarch butterfly today, as the public comment period on protecting monarchs under the Endangered Species Act closed. The U.S. Fish and Wildlife Service now has nine months to determine whether to propose protections for the iconic orange and black butterfly which has declined by 90 percent in the last 20 years. The agency’s review of the monarch was spurred by a legal petition filed in August by the Center for Food Safety, the Center for Biological Diversity, the Xerces Society and renowned monarch scientist Dr. Lincoln Brower, all of whom submitted comments today renewing their call for the agency to list the monarch butterfly as threatened. In December the Service announced a positive initial finding on the petition and determined that Endangered Species Act protection for monarch butterflies may be warranted, triggering a one-year status review. The petition has been resoundingly supported by monarch experts, legislators, and the public.

“Our petition is a scientific and legal blueprint for creating the comprehensive protection that the monarch so direly needs,” said George Kimbrell, senior attorney for Center for Food Safety. “It’s imperative that we protect monarchs now, before it’s too late.”

Last month the Fish and Wildlife Service announced that it will provide a total of $3.2 million to support monarch conservation projects. While this is a good start, that total falls far short of the funding that would be required to restore enough monarch habitat to ensure the butterfly’s future.

“The money the government has pledged sounds like a lot, but the truth is it isn’t even enough to restore 1 percent of the habitat that’s been lost,” said Tierra Curry, senior scientist at the Center for Biological Diversity. “We’re at risk of losing an animal that’s as American as apple pie and nothing short of Endangered Species Act protection will guarantee that we save the monarch.”

More than 40 leading monarch scientists and ecologists and more than 200 organizations and businesses sent letters to the agency urging federal protection for the monarch in November. Support from the general public has also been widespread, with over half a million signatures delivered in person today to FWS.* Representative Chellie Pingree (D-ME) has led a Dear Colleague letter in Congress in support of the ESA petition.

“ESA protection and the benefits that it will bring may be the only way to save the monarch and its astounding migration,” said Sarina Jepsen, Endangered Species Program Director at the Xerces Society.

As detailed in a new report from Center for Food Safety, the butterfly’s dramatic decline is being driven in large part by the widespread planting of genetically engineered crops in the Midwest, where most monarchs are born. The vast majority of genetically engineered crops are made to be resistant to Monsanto’s Roundup herbicide, a potent killer of milkweed, the monarch caterpillar’s only food. The dramatic surge in Roundup use with Roundup Ready crops has virtually wiped out milkweed plants in Midwestern corn and soybean fields. In the past 20 years it is estimated that these once-common iconic orange and black butterflies may have lost more than 165 million acres of habitat — an area about the size of Texas — including nearly a third of their summer breeding grounds.

The population has declined from a recorded high of approximately 1 billion butterflies in the mid-1990s to only 56.5 million butterflies this winter, the second lowest number ever recorded, after a slight rebound that is likely attributable to favorable weather during their breeding season. The overall population shows a steep and statistically significant decline of 82 percent over the past couple of decades. In addition to herbicide use with genetically engineered crops, monarchs are also threatened by global climate change, drought and heat waves, other pesticides, urban sprawl and logging on their Mexican wintering grounds.

Monarchs need a very large population size to be resilient to threats from severe weather events and predation. Nearly half of the overwintering population in Mexico can be eaten by bird and mammal predators in any single winter; a single winter storm in 2002 killed an estimated 500 million monarchs — 8 times the size of the entire current population.

*Petition signatures from the public were collected by the following organizations: The Center for Biological Diversity, Center for Food Safety, Friends of the Earth U.S, Organic Consumers Association, Sierra Rise, Care2, and CREDO.