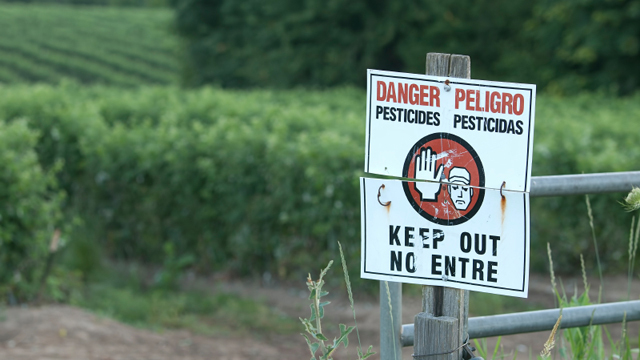 Eight national non-profit organizations concerned with the environment, food safety, children’s health, bee and bird conservation, and pesticide management, sent two letters calling on the Environmental Protection Agency to halt the approval process for a new insecticide called Sulfoxaflor that would be used on various vegetables, fruits, soybeans, wheat and turfgrass. The letters were sent to EPA on Tuesday, February 12, 2013.

“The combination of water solubility, persistence, and toxicity (especially to bees and pollinators) is particularly concerning because compounds with these same characteristics have shown adverse effects to non-target species,” said the letter from the Center for Food Safety, the Pesticide Action Network, American Bird Conservancy and Friends of the Earth.

The two letters were sent to EPA in response to the agency’s January 14 proposed “conditional registration” of the new insecticide. Sulfoxaflor is characterized by its long environmental persistence (over a year in some conditions) and by its high potential for surface and ground water contamination. The groups cited Sulfoxaflor’s toxicity to honey bees and to saltwater invertebrates, as well as concerns with respect to birds and other organisms. In addition, the groups pointed to studies linking Sulfoxaflor to developmental abnormalities in rodents and to benign and malignant tumors. Those tests and other evidence led the groups to assert that Sulfoxaflor’s potential mammalian and human toxicity has not been adequately evaluated. EPA has stated that “Sulfoxaflor exposure through drinking water alone has the potential to be a relevant acute or chronic exposure route of concern for mammals or birds.”

The groups are particularly worried about the effects on pollinators. Sulfoxaflor’s mode of action and toxicity present risks comparable to those exhibited by the neonicotinoids, a class of insecticides that are lethal to bees, birds, and aquatic organisms.

Over the past decade, honey bee colonies nationwide have suffered record losses of 30 percent to upwards of 90 percent in worst case scenarios. Pesticides have been identified as a primary contributing factor. The groups are astounded that the EPA finds it appropriate at this time to register yet another chemical that is “very highly toxic” to honey bees, especially given the incomplete studies and the lack of real-world data on Sulfoxaflor. The neonicotinoid pesticides have had extremely detrimental effects on honey bee populations, and approving Sulfoxaflor without more information about pollinator toxicity will likely compound these problems.

“Sulfoxaflor is highly toxic to honey bees according to EPA’s ecological assessment, and there are still unanswered toxicological data gaps regarding honey bees … Given the global phenomenon of bee decline and the recent precautions taken in the European Union regarding bee health with the suspension of certain neonicotinoid pesticides known to elicit adverse reactions in bees, it is irresponsible that the [EPA] would allow yet another chemical with a high potential to be hazardous to bee health into the environment,” said the second letter, signed by the groups Beyond Pesticides, American Beekeeping Federation, American Bird Conservancy, Boulder Innovative Technologies and the California Minnesota Honey Farms.

One letter points out that Sulfoxaflor induces high mortality among honey bees from zero to three days after it has been applied and that on average, the mortality rate was as high as 7–20 times that of a control group of bees not exposed. Also significant, in five of the six studies submitted, the amount of pesticide applied was only 3–67 percent of the maximum label rate that would be allowed following approval. The groups note the complete lack of testing of the pesticide anywhere near the maximum levels that would be allowed.

Of the 100 crops that provide 90 percent of the world’s food, over 70 are pollinated by bees. The value of crops pollinated by bees in the U.S. alone was estimated at $19.2 billion in 2010—that figure has since grown. Commercial beekeeping adds between $15 and $20 billion in economic value to agriculture each year. A petition requesting EPA to suspend the neonicotinoid, clothianidin (a pesticide with many similarities to Sulfoxaflor), was submitted to the agency in 2012 and was supported by over one million signatures.