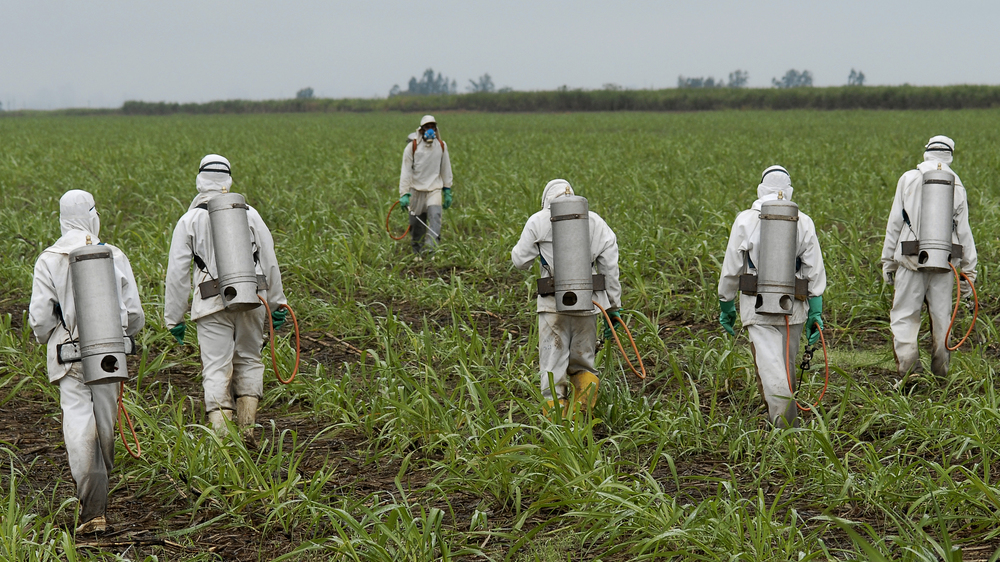 Illegal approval of dicamba use on engineered crops will harm farmers, environment

WASHINGTON—Farmers and conservation groups filed a federal lawsuit on Friday challenging the Environmental Protection Agency’s approval of Monsanto’s new “XtendiMax” pesticide. The approval of the pesticide company’s latest version of the older weed-killer known as dicamba permits it to be sprayed directly on Monsanto’s genetically engineered (GE), dicamba-resistant soybeans and cotton. The decision greenlights a more than 10-fold increase in use of the toxic pesticide, increasing risks to farmers, community health, and the environment. Because these same crops are also engineered to withstand applications of Monsanto’s Roundup, the overuse of that pesticide (containing the active ingredient glyphosate) will continue at current high levels.

“Federal regulators have abandoned the interests of farmers, the environment, and public health,” said George Kimbrell, of the Center for Food Safety and counsel in the case. “We won’t allow our food to be dragged backward into a pesticide-soaked nightmare – not without a hell of a fight.”

Dicamba is linked to increased rates of cancer in farmers and birth defects, while glyphosate was recently classified as a “probable carcinogen” by the World Health Organization. Farmers are extremely alarmed by dicamba’s propensity to drift and damage neighboring crops, while conservationists are concerned about its impacts to biodiversity. Dicamba drift threatens plants that provide nectar for pollinators and habitat for animals, and it is frequently detected in surface waters.

“Monsanto’s Roundup Ready crops created an environmental disaster by causing infestation of tens of millions of acres of farmland with herbicide-resistant weeds and spurring an enormous increase in pesticide use,” said Earthjustice attorney Paul Achitoff. “Planting more GE crops and dousing them with more noxious chemicals isn’t the answer. The Environmental Protection Agency should be protecting health and the environment, not Monsanto’s profits.”

Farmers in 10 states have already reported that much more limited dicamba spraying associated with Monsanto’s new dicamba-resistant crops has caused widespread damage to thousands of acres of their crops. And last fall, a dicamba drift dispute between an Arkansas and a Missouri farmer even resulted in one farmer being shot to death.

The huge increase in dicamba spraying will trigger an outbreak of dicamba resistance in weeds, just as massive use of Roundup on first generation GE crops created an epidemic of weeds immune to glyphosate. While Monsanto spins its new dicamba crops as a fix to the current weed resistance problems its own Roundup Ready crop system caused, many scientists, and even the U.S. Department of Agriculture, predict the opposite: the rapid emergence of more superweeds, resistant to both herbicides. The evidence on the ground already indicates EPA’s weak weed resistance “management” plan will make the problem even worse, both because it lacks limits on dicamba use, and because it primarily relies on Monsanto for its implementation and enforcement.

Margot McMillen, NFFC board representative and Missouri organic farmer commented: “The whole system of genetic engineering threatens plant and animal health. Because of cross-pollination, the original non-GMO and wild weed genomes are fast disappearing, while the fight against weeds requires more and more potent chemicals. These new crops and their unintended consequences were predictable and avoidable, but the safe and healthy alternative offered by sustainable and organic agriculture has been ignored.”

“Once again the EPA is allowing staggering increases in pesticide use that will undoubtedly harm our nation’s most imperiled plants and animals,” said Nathan Donley, a scientist with the Center for Biological Diversity. “Iconic species like endangered whooping cranes are known to visit soybean fields, and now they’d be exposed to this toxic herbicide at levels they’ve never seen before.”

When we think about seeds, the images we most often conjure are simple, comforting and tangible – planting vegetable and flower gardens in the spring, spitting watermelon seed…