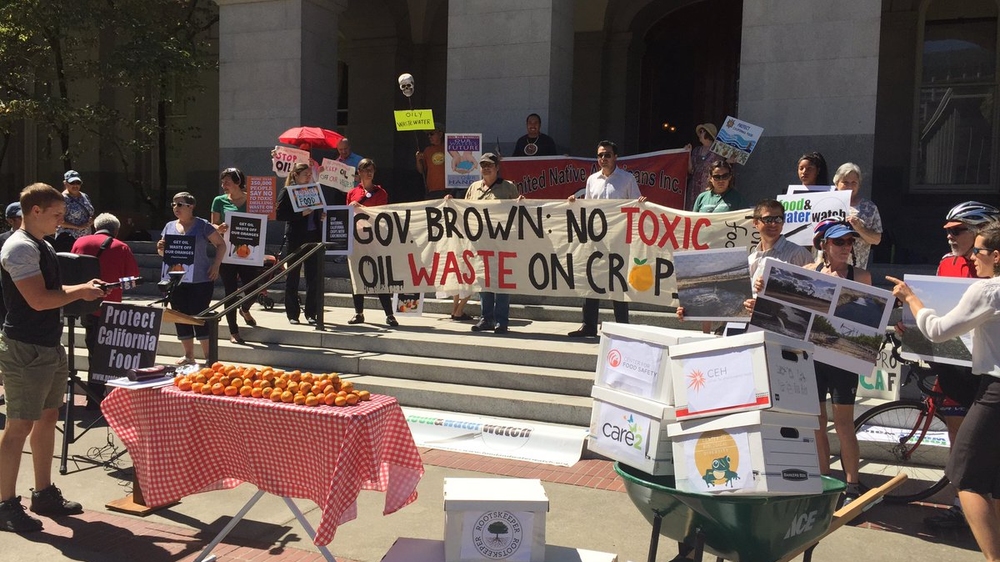 SACRAMENTO, Calif.— Pushing a wheelbarrow filled with 350,000 petition signatures, concerned Californians gathered outside the capitol today to urge Gov. Jerry Brown and the California Water Resources Control Board to stop the potentially dangerous practice of using wastewater from oil drilling to irrigate California’s crops. The wastewater, sold by Chevron and California Resources Corporation, is now being used to irrigate over 90,000 acres in the Cawelo Irrigation District and the North Kern Water Management District, and is slated to expand in the near future to other districts.

The group, which included Assemblymember Mike Gatto, UCSF nurse practitioner Lisa Hartmayer, Center for Biological Diversity scientist John Fleming and California consumers, delivered a petition with more than 350,000 signatures, gathered around the state and nation, calling for an immediate halt to the practice. The petition signatures were collected by CREDO, Care2, Food & Water Watch, the Center for Biological Diversity, RootsKeeper, Center for Environmental Health, Breast Cancer Action, Center for Food Safety, Courage Campaign, and the Center for Race, Poverty and the Environment.

“Californians want to know what is in the water and the soil that is used to grow their food. This should not be a problem, especially if there is nothing to hide,” said Assemblyman Mike Gatto (D-Los Angeles).

California produces almost half of the fruits, nuts and vegetables that feed the United States, and more than 100 farms in the Central Valley use oil wastewater for irrigation. Some of the United States’ most popular brands grow food in the Cawelo and North Kern water districts, including Trinchero Family Estates (makers of Sutter Home wines), Halos Mandarins (formerly known as Cuties) and The Wine Group (makers of Cupcake and Fish Eye wines).

At the same time, there hasn’t been a comprehensive, independent study to determine if the wastewater is safe for crop irrigation. The limited analysis done used outdated methods; regulators don’t screen for all the chemicals used in oil extraction, many of which are carcinogens. The Los Angeles Times reported that a test of the wastewater sold by Chevron to the Cawelo Irrigation District contained acetone and benzene.

Some of the chemicals used in oil operations are linked to cancer, kidney failure, reproductive issues and liver damage. No comprehensive and independent analysis has been conducted to assess the safety of the wastewater. Oil-industry wastewater can contain high levels of benzene and other cancer-causing chemicals. State oil officials’ own study detected benzene levels in oil wastewater at thousands of times the federal limits for drinking water.

“As a nurse, one of the simplest yet most important recommendations I can give a patient is to eat more fruits and vegetables,” said Lisa Hartmayer, nurse practitioner at UCSF. “How can our governor and water regulators sleep at night knowing that the fresh foods that millions of people eat to stay healthy may actually be threatening their health? We don’t know if our tangerines, almonds and grapes are contaminated with water that could be carcinogenic.”

In addition to the dangers posed to consumers, agricultural workers are exposed daily to the oil and gas wastewater with no protection for their health and safety.

“Oil wastewater doesn’t belong on California’s crops. It’s irresponsible to take this kind of risk with our food supply,” said John Fleming, a scientist with the Center for Biological Diversity. “We should take a precautionary approach to mixing oil with food and wait until there are studies proving this practice is safe before we even consider it.”

“I’m here for my kids. It concerns me that Governor Brown would allow this practice without thorough testing. This is the food that I feed my kids every day. The thought that they could get sick from tainted food really worries me,” said Sue Chiang from Oakland.

Petition signers from around the state appealed directly to the governor and his desire to be perceived as an environmental champion. Rev. and Mrs. Don Baldwin from Nevada City wrote in their comments: "Dear Gov. Brown - If you are to truly go down in history as our 'environmental' governor, you MUST see this as one of the most significant actions you need to take."

A growing number of Californians are raising concerns about the use of wastewater for crop irrigation and organized Protect California Food, an affiliate of Californians Against Fracking, which is calling on Governor Brown and state water regulators to immediately ban the practice. Californians Against Fracking is a coalition of about 200 environmental business, health, agriculture, labor, political and environmental justice organizations working to win a statewide ban on fracking and other dangerous extraction techniques in California. Follow @CAagainstFrack on Twitter. 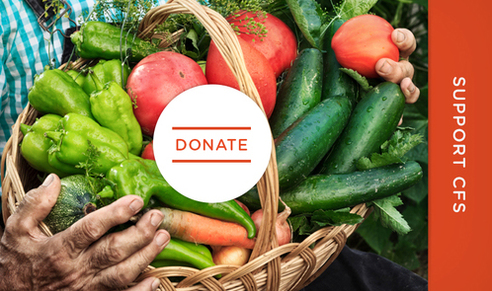