THE HIDDEN TRUTH BEHIND PESTICIDE-SEED COMPANIES IN HAWAIÊ»I

HawaiÊ»i is a relatively small state, but has one of the highest rates of open-air GE field tests in the U.S.

The Hidden Truth Behind Pesticide-Seed Companies in HawaiÊ»i 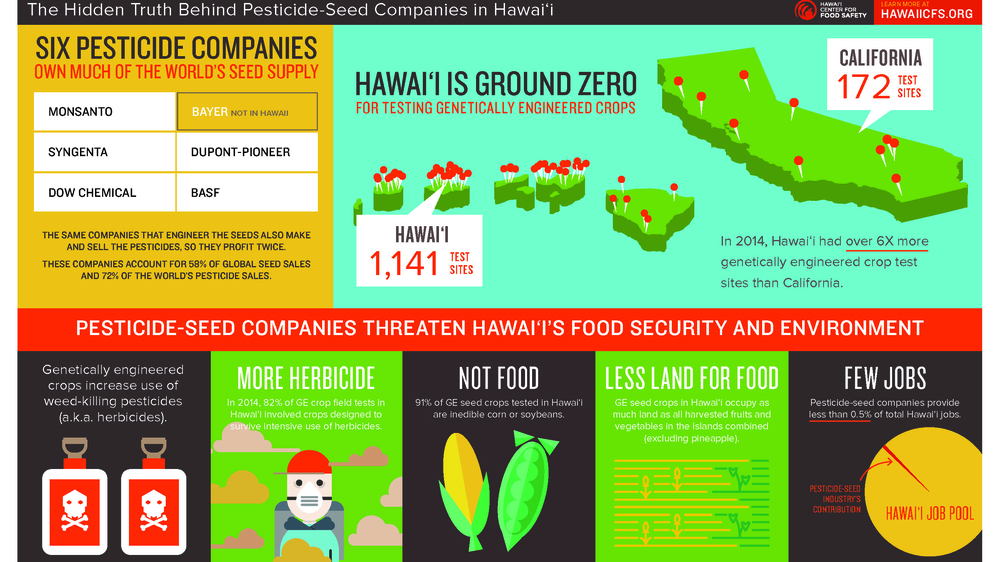 Did you know that over 90% of GE crops grown in HawaiÊ»i are inedible, experimental corn and soybean varieties, and that chemical companies are spraying pesticides 2 out of every 3 days, up to 16 times a day? This means companies like Monsanto occupy prime agriculture land, spraying dangerous chemicals, but contribute nothing to the local food supply.

HawaiÊ»i is a relatively small state, but has one of the highest rates of open-air GE field tests in the U.S - in 2014, chemical companies conducted GE field tests on over 1,381 sites. Herbicide resistance has been the most frequently tested trait over the past five years. This means GE crops tested in HawaiÊ»i, by and large, are designed to withstand ever greater applications of herbicides, posing a direct threat to human and environmental health.

Pesticide drift is a primary concern for communities living alongside GE operations. In CF's report, Pesticides in Paradise, HCFS reviews over 150 published scientific and medical research examining the threats pesticides used in HawaiÊ»i pose to public health, especially the risk to pregnant women and young children. The findings reveal that pesticide exposure in utero and early life has been linked to childhood cancers, neurobehavioral and cognitive deficits, adverse birth outcomes, and asthma.