U.S. States have taken the lead in protecting the public"™s right to know what is in their food. 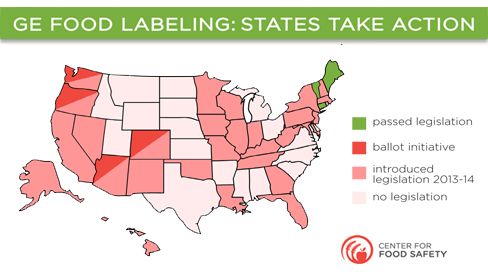 In 2011, Center for Food Safety submitted a formal legal petition to the
Food and Drug Administration (FDA) on behalf of over 650 companies and organizations demanding that FDA require the mandatory labeling of genetically engineered (GE) foods. Since it was filed, 55 members of Congress and over 1.4 million people have submitted comments in support of the petition; yet, FDA has failed to take action to require the labeling of GE foods.

Because of this, U.S. States have taken the lead in protecting the public’s right to know what is in their food. In 2013, Connecticut and Maine passed
GE labeling laws, and Vermont passed the first GE labeling bill that has no trigger clause. Vermont's law will go into effect in 2016. In total, 54 bills were introduced across 26 states, and a Washington State ballot initiative narrowly lost, 51-49%. And the momentum is only growing.

Already in 2014, 35 bills have been introduced in 20 states, with an Oregon ballot initiative also on target for November 2014.