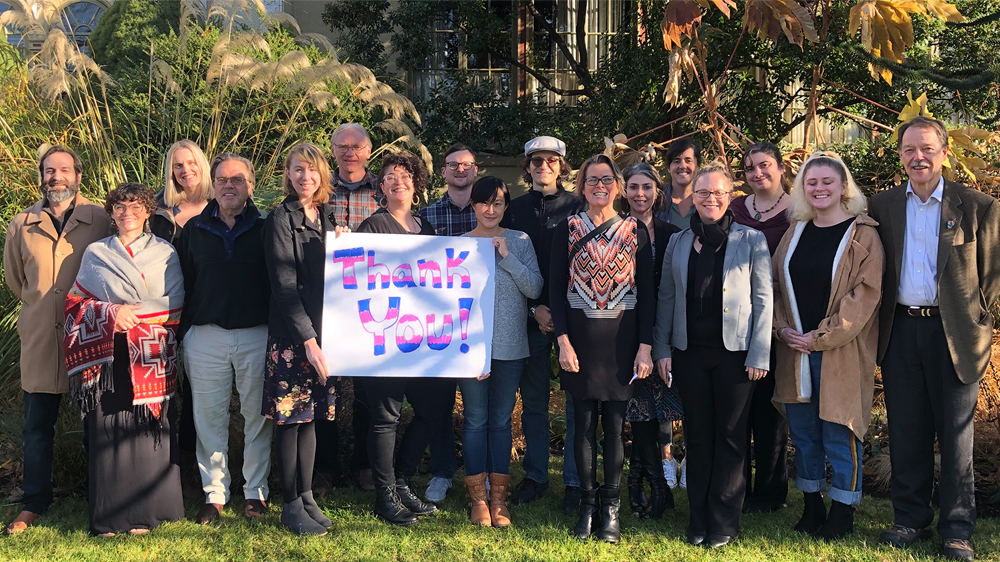 Working for a fairly small organization, it's easy for those of us who wear so many hats to get lost in the weeds of the daily "non-profit grind." One day, we're busy building a legal strategy; the next, we're sitting down with our supporters to get to know more about the issues you're facing in your communities. One week, we're talking to key elected officials; the next, we're shooting amazing video content about the future of agriculture.

If I just stared at my task list all day long, ticking off item by item, maybe I'd forget the larger force that all this "doing" makes me a part of.

But that's why I love this time of year… when we start to slow down, reflect, and connect with the people and things that matter to us the most.

As 2019 enters its final quarter, I'm sitting here at my computer, in Hawaii, working "alongside" my colleague, Brenna, in Los Angeles, taking in all that Center for Food Safety (CFS)—from Portland to San Francisco, from LA to D.C.—has accomplished. We're a group of radical and passionate doers, collectively changing the landscapes and food-scapes of our communities, our country, and Mother Earth. Here are 17 of the groundbreaking victories we achieved together in 2019:

1. CFS is preventing the mass approval of GMO crops and foods! We're in court fighting some of our earth's biggest polluters: Monsanto, Dow Chemical, and the agency that gives a green light to these polluters—the U.S. Environmental Protection Agency (EPA)—in an effort to stop the approval of a Monsanto weedkiller that's been engineered to work with several new generation GMO crops, as well as Dow Chemical's "Enlist Duo" pesticide cocktail, a combination of glyphosate and 2,4-D (one of the active ingredients in "Agent Orange").

We should not be exposed to unsafe and carcinogenic chemicals in our food. Our team is here to stop the use of dangerous pesticides that threaten our health and the health of our planet. If we work together, we can stop the next generation of dangerous GMO crops!

2. The CFS legal team is on the frontlines of stopping GE salmon from making its way to store shelves. We have an active lawsuit right now against the largest GE salmon company—but it doesn't stop there!

Salmon was first, but at least 35 other genetically modified animal species are currently being developed!

If we don't win, it's just the start of a domino effect that could be the end of our natural, wild fisheries. That's why we're challenging every aspect of the FDA's approval, including their failure to evaluate the environmental impacts of GMO fish.

3. CFS is saving the bees! Our legal team scored a groundbreaking legal victory when a federal court concluded that the EPA approval of dozens neonicotinoid pesticides was illegal. As a result of our lawsuit, a dozen of these bee-killing pesticides will be taken off the market this year! EPA has also agreed to assess neonic impacts on other endangered pollinators and species by specific deadlines. Both of these announcements are the first time in U.S. history such steps have been required for addressing the impacts of neonic pesticides on pollinators. To complement this legal work, CFS created the Wild Bee ID website and phone app to help you identify bees in your own backyard and cultivate your own bee-friendly garden.

4. CFS is protecting our food! Our legal team just won a huge lawsuit that will force the FDA to identify and better protect us from the most high-risk foods! No more waiting in the dark for weeks or months when there's a foodborne illness outbreak, not knowing what's safe to feed your family. Now it'll be much easier to find the source of outbreaks and act fast to stop them!

5. CFS is protecting our waters and fishers. We're one of the only organizations fighting industrial aquaculture facilities, or the so-called "factory farms of the ocean." CFS won a major lawsuit protecting our oceans from massive contamination, as a federal court declared that raising fish in aquaculture facilities using toxic chemicals is illegal.

6. CFS is saving our children's brains! In a victory for our children, we wrote, lobbied, and passed a bill that banned the brain-damaging pesticide, chlorpyrifos, in Hawaii and also secured similar bans in California and New York. We're working hard to replicate these wins in other states as well as working with Hawaii Senator Brian Schatz to pass a bill at the federal level!

7. CFS and allies barred the state of Iowa from enforcing a controversial new "ag-gag" law which would have criminalized investigations at factory farms, slaughterhouses, and puppy mills! The state is prevented from enforcing its new ag-gag law while the lawsuit proceeds. CFS has historically defeated numerous laws designed to squash investigations at factory farms—these are victories for all those who support humane treatment of farm animals and safe food!

8. CFS and allies shut down a mega-CAFO dairy and stopped it from polluting local waterways and the environment with animal discharge in Hawaii! CFS and Hawaii community group Kupale Ookala sued Big Island Dairy, LLC, a large concentrated animal feeding operation (CAFO) located on Hawaii's Big Island. This year's settlement resulted in the closure of the offending dairy, and settlement funds for impacted communities, which is a huge win for the local groups and the environment.

9. We had a huge success with our national petition against Tillamook Creamery. The beloved Oregon company markets their products as sustainable and humane, but actually sources milk from polluting factory farms. We got 50,000 people to agree that they should #BeTheTruth and support local family farms instead. We also launched EndIndustrialMeat.org, a groundbreaking "go-to" resource on the impacts of industrial animal agriculture and alternatives to the system.

CFS is protecting water and pollinators in California:

10. CFS defeated the proposed Cadiz water project in court, a 43-mile-long pipeline through California's Mojave Trails National Monument. A favorite of the Trump Administration, this project was a for-profit privatization scam that would severely degrade Los Angeles' water supply and take water from an essential desert ecosystem.

11. CFS and allied organizations successfully stopped the $17 billion Twin Tunnels water project. The project would have been one of the largest corporate water giveaways in California history, transferring water and control of the Delta ecosystem to some of California's most powerful and wasteful agricultural giants.

12. CFS is protecting bumblebees by filing a petition asking the California Department of Fish and Wildlife to list four species of bumblebees as endangered and eligible to receive protection under California's Endangered Species Act. This year, the Department responded to our petition and is now in the formal process of exploring protecting the four bumblebee species—we are on our way toward listing bees and insects as endangered for the first time in the State!

CFS helped protect the waters and wildlife of Washington State:

13. CFS won a case against the U.S. Army Corps of Engineers to stop polluting commercial shellfish aquaculture operations in Washington State, a huge win for the environment and iconic species like salmon and orcas.

14. CFS stopped the shellfish industry from spraying oyster beds with a dangerous neonicotinoid insecticide, imidacloprid, protecting Washington's Willapa Bay from the use of this neurotoxin in the water.

CFS is protecting our precious land in Hawaii from pesticide conglomerates!

15. CFS worked with many organizations to secure the Board of Education's statewide policy banning herbicide use on all public school campuses in Hawaii.

16. CFS, in tandem with a robust coalition, protected Hawaii's public trust resources with an unprecedented defeat of a special interest "water theft bill."

All of this wouldn't be possible without the day-to-day support of our administrative team, our interns, our science team, and our donors!

Thank you from the bottom of our hearts for making all this progress and many victories possible in 2019! Onward!