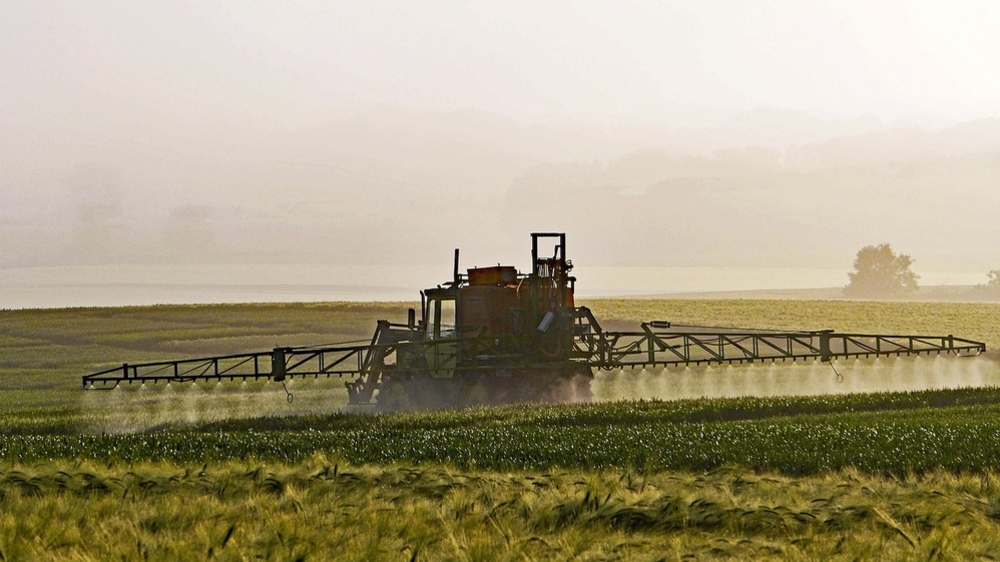 For further documentation, see ¬Center for Food Safety’s comments to the Arkansas Plant Board on the State’s dicamba restrictions and Monsanto’s petition to rescind them

What is XtendiMax?
XtendiMax is Monsanto’s formulation of dicamba, a weed-killing pesticide first introduced in the 1960s, and long notorious for its propensity to drift and damage neighboring crops. The EPA approved XtendiMax for “over-the-top” application to Monsanto’s genetically engineered, dicamba- and glyphosate-resistant soybeans and cotton in November 2016.

Hasn’t there always been herbicide drift? What’s the big deal with dicamba?
There has never been anywhere close to so much herbicide drift injury as was caused by dicamba alone in 2017. There have been roughly 3,000 official complaints of dicamba damage to soybeans covering an astounding 3.6 million acres (Figures 1 & 2). Because experts estimate only one in 10 dicamba drift episodes were reported, the true impacts could be 10 times greater. According to North Dakota pesticide specialist Andrew Thostenson: "We are in unprecedented, uncharted territory. We've never observed anything on this scale in this country since we've been using pesticides in the modern era."

Why has XtendiMax caused such devastating crop injury?
First, while any pesticide can drift in the wind while it is being sprayed, dicamba poses a second threat. It volatilizes (vaporizes) from soil and plant surfaces hours to days after application, forming vapor clouds that can drift long distances to injure sensitive crops. Second, while dicamba has traditionally been sprayed around planting time, when most crops have not yet sprouted, XtendiMax is applied later in the season when crops have leafed out and are susceptible to injury; this is also when higher temperatures increase volatilization. Finally, dicamba is so potent that even extremely low vapor concentrations can harm flowering crops and other plants. 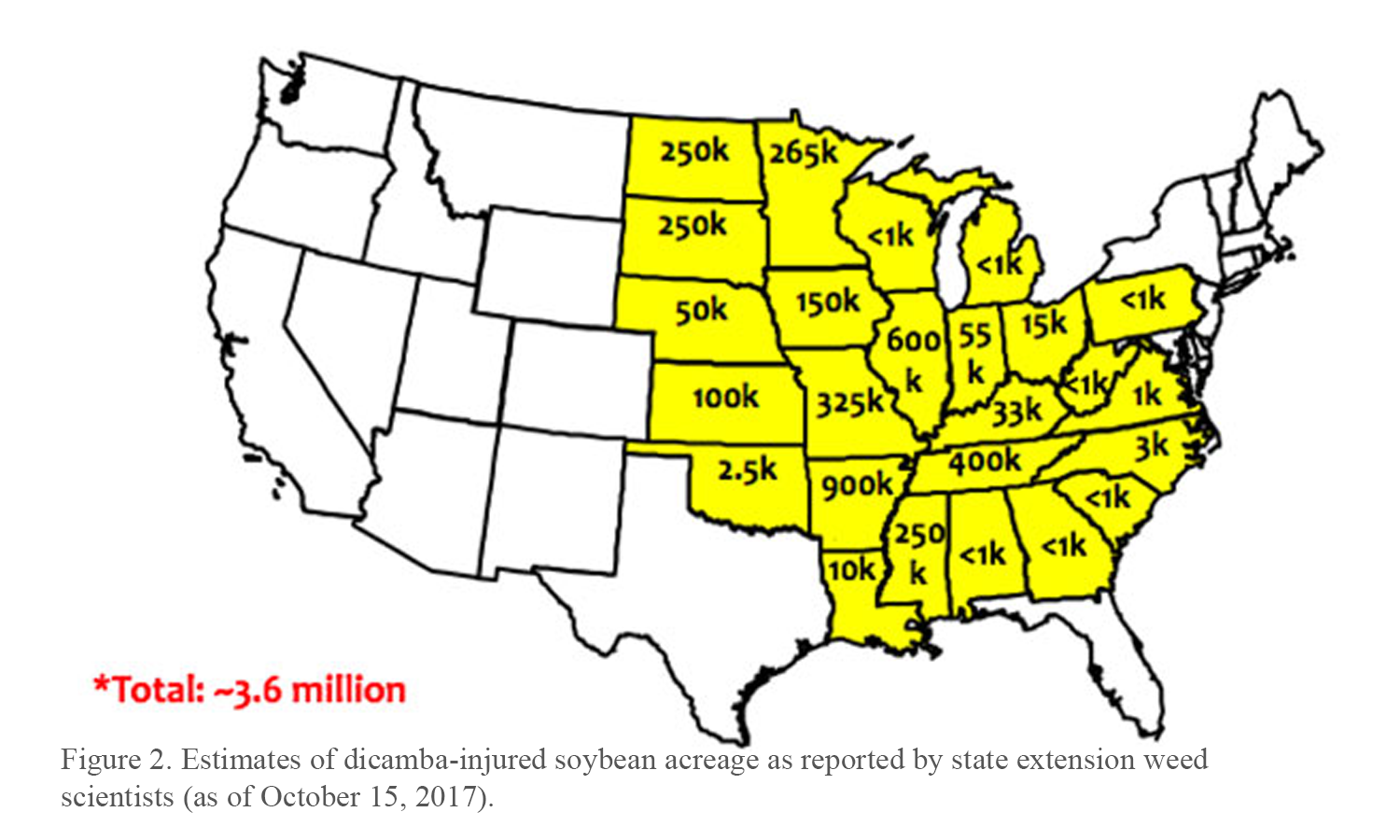 Is it only soybeans that have been injured by dicamba drift?
No. Dicamba drift has caused widespread injury to vegetables, melons, orchards, grapes, pumpkins, peas and tobacco, not to mention residential gardens and trees, and wild plants. We hear more about soybean injury because soybeans are among the most widely planted crops in America and are incredibly sensitive to dicamba. A beekeeper operating in Arkansas and several other states reports that honey production is down sharply in areas where dicamba was heavily sprayed, a possible sign that dicamba drift is killing off the flowering plants that bees depend upon for nectar and pollen.

Isn’t crop damage also from illegal use of older dicamba formulations?
Investigations have found that most farmers have used XtendiMax or other formulations (Engenia, FeXapan) approved for use on dicamba-resistant crops (new dicamba), and complied with extremely complex and restrictive usage (label) instructions – and still injured their neighbors’ crops via drift. There is also no evidence the label directions actually prevent drift in real world farming conditions. Independent field trials show that over time, XtendiMax is at best only slightly less volatile than other versions of dicamba, directly contradicting Monsanto’s claims. While some farmers have likely made illegal use of old dicamba, there is abundant evidence that drift injury occurs even with label-compliant use of new dicamba.

Isn’t XtendiMax “low-volatility”?
This is what Monsanto claims. Yet scores of independent studies demonstrate that XtendiMax is at best only slightly less volatile than Clarity and other dicamba formulations (see last question).

Why did Monsanto prohibit independent testing of XtendiMax for drift?
Monsanto prohibited independent scientists from testing the drift properties of XtendiMax until 2017, following its approval by EPA. This extraordinary prohibition was at odds with the universal practice of pesticide companies permitting agronomists to test their products before commercial release. Monsanto’s explanation for the prohibition – to avoid any delay in EPA approval – rings true. Had the independent tests that prove XtendiMax’s volatility been allowed prior to EPA approval, they might well have delayed or even stopped EPA’s registration of this defective product for use on dicamba-resistant crops, an outcome that Monsanto  avoided with its ban.

How did states respond to dicamba drift?
Because EPA failed to address risks from volatility, at least four states have established cut-off dates – or dates after which dicamba may not be sprayed – in order to reduce the risk of crop injury in 2018: Arkansas, Missouri, North Dakota and Minnesota. Others states, such as Indiana and Tennessee, have enacted other requirements.

Does dicamba injury lead to reduced yield?
In many cases, yes. Conditions that make yield loss more likely occurred frequently in the 2017 crop season. These include dicamba drift exposure during the crop’s sensitive reproductive phase; exposure to drift two or more times; and unfavorable weather conditions after the exposure(s), such as drought. For instance, Missouri peach grower Bill Bader lost at least 30,000 trees to dicamba drift, while Missouri soybean farmer Chris Crosskno anticipated an 8-10 bushel/acre yield reduction, for a loss of about $180,000. Arkansas agronomist Jason Norsworthy predicted less than 5 bushel/acre harvests (pp. 142-143) for some dicamba-injured soybeans in his state (roughly 90% yield reduction), while Minnesota farmers report that dicamba drift is costing them millions of dollars in lost soybean yield. Dicamba drift also retards growth, which gives weeds the upper hand. This in turn can lead to more herbicide spraying.

Did average soybean yields decline due to dicamba drift?
While there is extensive evidence that dicamba drift caused yield losses for many individual farmers (see last response), at state and national scales it is impossible to disentangle its influence from that of many other factors. Weather conditions always exert a substantial influence on yield, and can either ameliorate or exacerbate dicamba’s effects. Tennessee and North Dakota – both hard hit by dicamba drift (Figures 1 & 2) – are good examples. Tennessee had good growing conditions, which helped uninjured soybeans reach near their full yield potential and dicamba-damaged soybeans recover somewhat. Average Tennessee yield rose 10% from 2016 (Figure 3). In contrast, heat stress and severe drought conditions in North Dakota suppressed soybean yields generally, and exacerbated the impacts of dicamba injury. The average North Dakota yield fell 22% from 2016 (Figure 3). 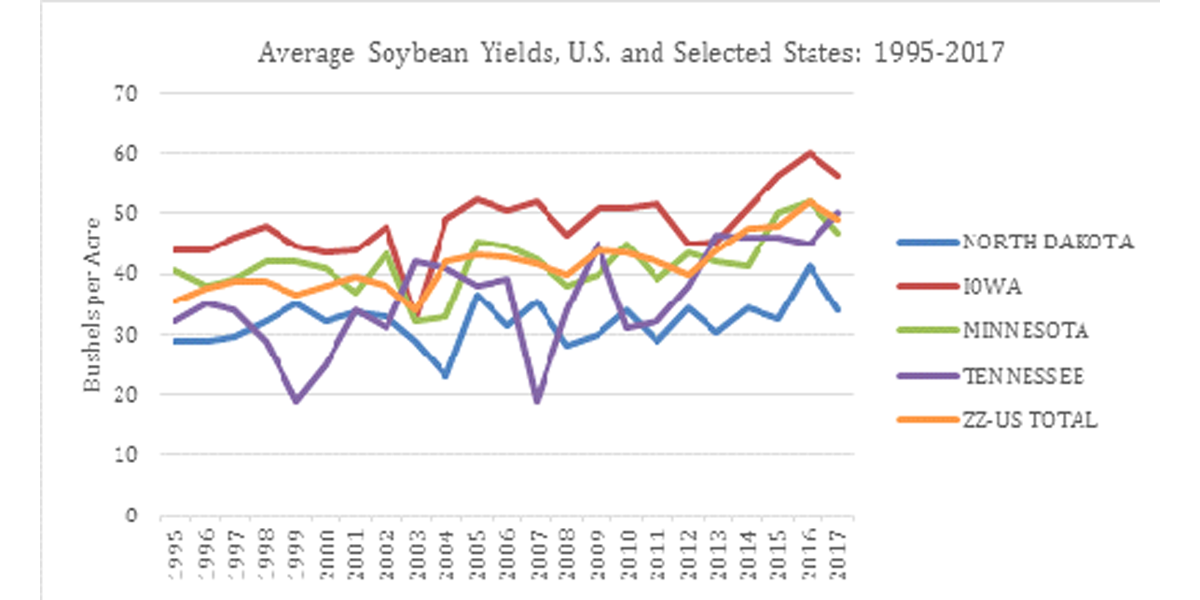 If dicamba drift reduced yield, why did soybean production rise in 2017?
Because American farmers planted far more soybeans than ever before in 2017 – 90.1 million acres – 8% more acres than in 2016, the previous record. Average national soybean yield, however, fell by 6% (Figure 3).

Why are farmers growing dicamba-resistant crops?
Some farmers with serious infestations of glyphosate- and multiple herbicide-resistant weeds see the ability to spray XtendiMax “over-the-top” of dicamba-resistant crops as a convenient way to control them. Other farmers have switched to dicamba-resistant soybeans to avoid the crop injury they fear (and which many have experienced) growing non-dicamba-resistant varieties. Some farmers regard this as “tantamount to extortion,” given the high cost of Monsanto’s seeds, and class action lawsuits charge Monsanto with illegal monopolistic behavior on these same grounds.

Are there any dicamba-resistant weeds?
2017 is the first year dicamba-resistant soybeans and cotton have been widely planted, yet scientists are already finding initial signs of dicamba-resistance in Palmer amaranth, farmers’ most feared weed, in Arkansas and Tennessee. Other likely candidates for dicamba resistance are kochia, waterhemp and horseweed – all of which have large populations already resistant to glyphosate, with dual resistance to both herbicides highly likely.

Why did Monsanto develop dicamba-resistant crops?
Monsanto acquired the rights to dicamba-resistance technology from its developers at the University of Nebraska in 2005. Monsanto understood even then that the glyphosate-resistant weed epidemic it was helping to create (see next question) would eventually open a profitable market for a second-generation of crops resistant to dicamba, sold to farmers as a means to control glyphosate-resistant weeds.

Where does the dicamba-resistance gene come from?
The dicamba resistance gene in Monsanto’s crops was derived from bacteria that had evolved dicamba resistance in storm water retention ponds at a dicamba production plant in Texas. This dicamba-degrading gene was initially viewed as a means to break down and hence “bioremediate” soil and water polluted with dicamba (then viewed as a hazardous pesticide, even by EPA). Ironically, University of Nebraska and Monsanto repurposed the gene to dramatically increase pollution of the environment with dicamba.

Does dicamba pose human health risks?
Because Monsanto’s GMOs are also engineered to withstand applications of Monsanto’s Roundup, the overuse of Roundup (containing the active ingredient glyphosate) will continue at current high levels. Dicamba use is projected to increase 20-fold with Monsanto’s GMOs, increasing exposure. Dicamba is linked to increased rates of cancer in farmers and birth defects, while glyphosate was recently classified as a “probably carcinogenic to humans” by the World Health Organization. Both dicamba and glyphosate are associated with increased rates of the same immune system cancer – non-Hodgkin lymphoma – in farmers. EPA dismissed pesticide industry studies providing evidence of dicamba’s carcinogenicity in rodents and potential neurotoxicity.