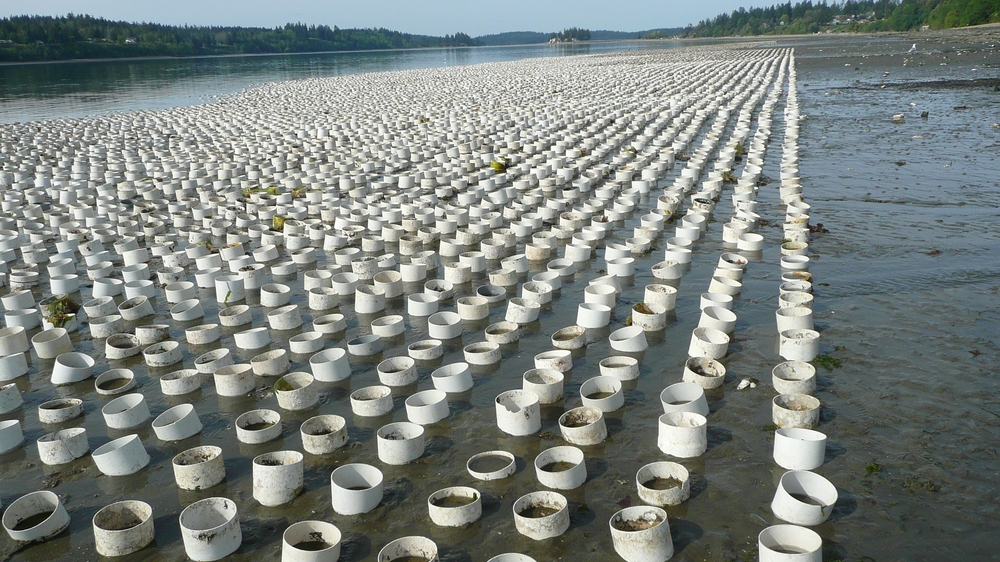 Would you want to walk on this beach? Geoduck tubes, Totten Inlet 2008
(Credit: Coalition to Protect Puget Sound Habitat)

The same Trump U.S. Army Corps of Engineers that approved the controversial Dakota Access Pipeline has now approved a new commercial shellfish aquaculture permit for Washington State. This irresponsible permit approval would allow a massive expansion of this already large industry, with no protections for wildlife, water quality, ecosystems, or people. So CFS is taking the Trump Administration to federal court to stop this dangerous permit.

Modern industrial shellfish operations are essentially oyster and clam CAFOs, or “confined animal feeding operations.” Like their land-based cousins (housing thousands of pigs, chickens, or cows), industrial shellfish operations have substantial environmental impacts, including degradation of wildlife habitat and reductions to biodiversity. These operations introduce pollutants like pesticides and plastics into the marine environment, which already suffers from various forms of pollution (including from industrial dairy CAFOs) and a scourge of plastic waste.

CAFOs are known for cramming too many animals into one space, to the detriment of those animals’ health, the environment, and people unlucky enough to live near a CAFO. One of the most notable problems with CAFOS is their concentration of a massive amount of waste on too little land. Industrial shellfish aquaculture operations employ a similar system, but do so in public waters and critical habitat for many species. A shellfish “CAFO” also concentrates waste in one place (as well as the pollutants discussed below), but because they exist in marine waters they pose unique problems beyond those we see with land-based CAFOs. These operations take up vast parcels of beach and house many thousands of farmed bivalves, which compete with wild species for food, leading to a reduction in biodiversity. In addition to waste deposition and food competition, these operations are often bad neighbors: Many Washingtonians forced to live near an industrial shellfish operation suffer from light and noise pollution and gear littered on the beach (either in place or strewn about after storms), which can make it impossible to walk on or enjoy a once picturesque beach. They ask: should our public waters and shorelines be entirely coopted for the profit of a few to the detriment of wild species and residents?

Imagine walking out onto the once-picturesque beach and finding 42,000 PVC pipes jammed into the sand, covered in plastic anti-predator netting. This is a typical geoduck operation, the geoduck being a clam produced almost exclusively for the Asian luxury foods market.

Anti-predator netting is frequently used in clam production; however, studies show while it does not work very well to keep predators out, it does result in trapping of wildlife (like crabs, fish, and birds like juvenile bald eagles) and other negative changes to the beach structure. These nets often cover the entire area authorized for shellfish production, and pose a particular threat to forage fish, like Pacific herring, that spawn in these areas and are an important prey resource for many species, including Chinook salmon, steelhead, bull trout, and marbled murrelet. Not only that, these plastic pipes, nets, bags, racks, and other gear often become dislodged during storms, spreading the plastic pollution and causing hazards to people. These plastics can also break down into microplastics, which act like a poison pill to the creatures that ingest them, including the very oysters being cultivated. 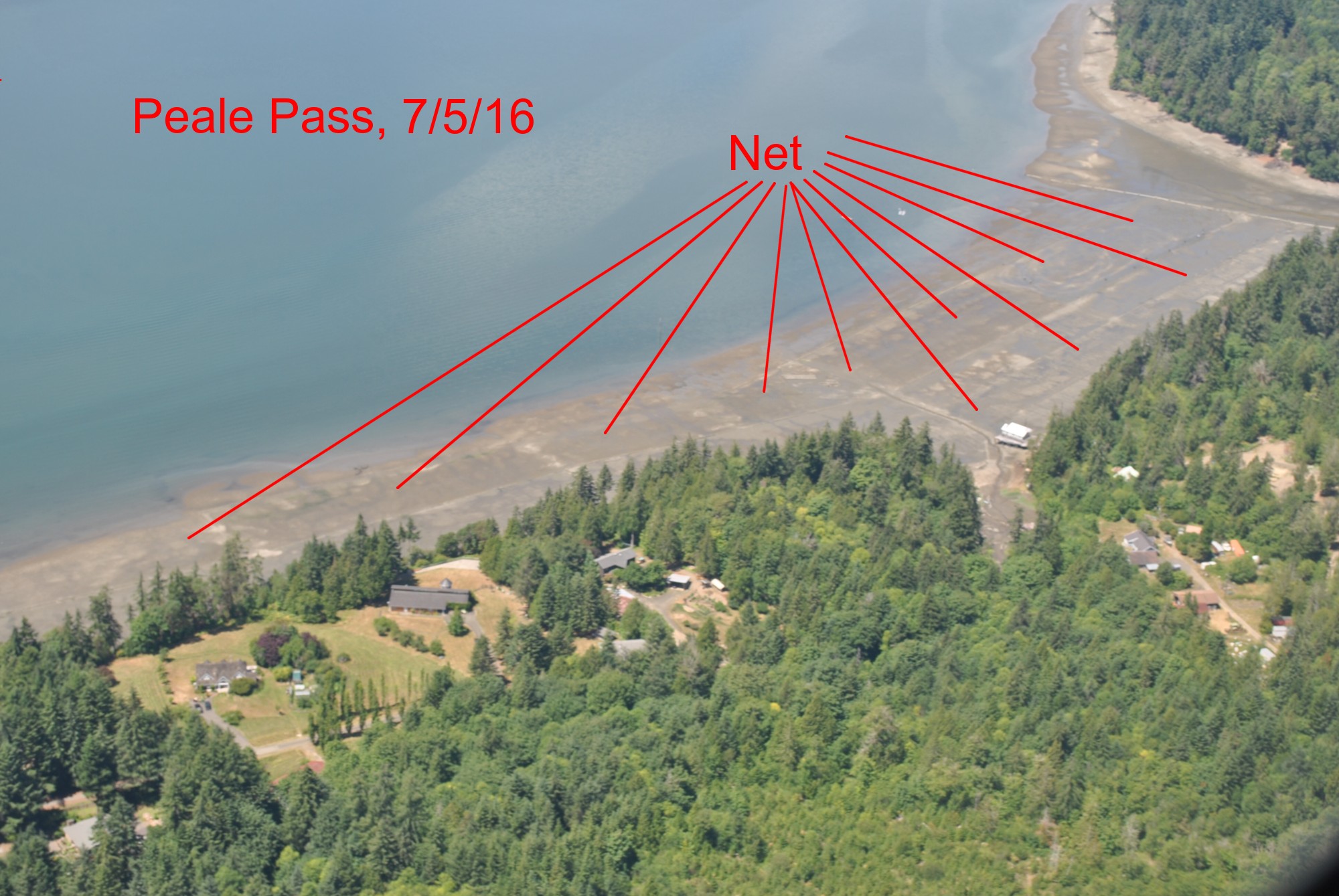 If you follow Center for Food Safety’s work, you are familiar with the disturbing decline in pollinators, like honey bees, and increasing scientific confirmation that neonicotinoid insecticides (or neonics) are at least partly to blame. Well, bees are not the only organisms hurt by these neurotoxins; they are also highly toxic to aquatic invertebrates, like crabs. While there may not be many bees on the tidal flats where shellfish aquaculture takes place, there are many invertebrates that live on the ocean floor, including commercially important species like Dungeness crab. Only Washington State allows shellfish growers to use pesticides on their shellfish beds, and right now growers are seeking to use imidacloprid (one of the oldest neonics) to kill burrowing shrimp, which are native to Washington and a food source for many species, like endangered green sturgeon and salmon. The problem is that imidacloprid will kill off all invertebrates on the beds where it is sprayed, including important food sources for wildlife and people, and spread easily in water.

Currently, shellfish growers in Willapa Bay and Grays Harbor (in southwestern Washington) have a permit to spray herbicide on eelgrass, a highly valued habitat for numerous species (including for food, shelter, and spawning), which absorbs carbon dioxide and produces oxygen, providing mitigation against ocean acidification due to climate change. Unfortunately, eelgrass is declining around the world, and Puget Sound Partnership, the Washington state agency leading the region’s collective effort to restore and protect Puget Sound, has identified eelgrass as a prime indicator of estuarine ecosystem health and has established a goal of increasing eelgrass area in Puget Sound by 20% by the year 2020. Intentionally killing off eelgrass flies in the face of this goal to protect the health of Washington’s marine ecosystems.

Despite shellfish aquaculture’s negative impacts on wildlife and Washington’s shorelines, the Army Corps approved its expansion. The permit will allow an expansion to over a third of all Washington tidelines, from around 40,000 acres to 72,300 acres. The Corps attached no conditions to this permit to mitigate the impacts of shellfish aquaculture, or to prohibit some of the more damaging practices. CFS and other groups, tribes, and agencies all have grave concerns about the cumulative impact of this industrial activity on that many acres. Moreover, under an arbitrary definition of “new” operation, the Army Corps would consider almost all of that new acreage to be “existing,” meaning it can avoid any protections for eelgrass, forage fish, and other wildlife required for “new” aquaculture. Under the 2017 approval, an operation would be considered “existing” so long as some commercial shellfish activity took place in the area within the last 100 years. This means that an industrial-sized operation in 2018 would be “existing” if there was, say, a small oyster operation in the area in 1919, even with no aquaculture in-between. This will mean lots more aquaculture, and far fewer protections for essential aquatic habitat and wildlife.

This blatant disregard for the environment in favor of corporate profit has become typical of the Trump Administration. But the government’s duty is to safeguard the public interest, not corporate dollars. We must continue to demand and force urgent action, to protect people and the planet. That’s why CFS is standing up to the Trump administration in court to stop this approval and protect Washington’s wildlife, shorelines, and people. 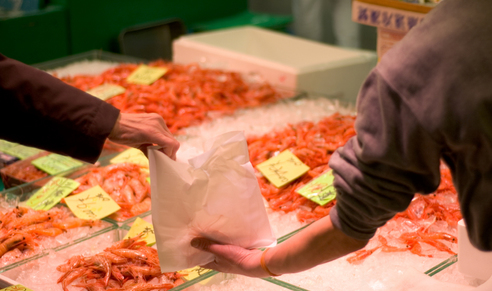