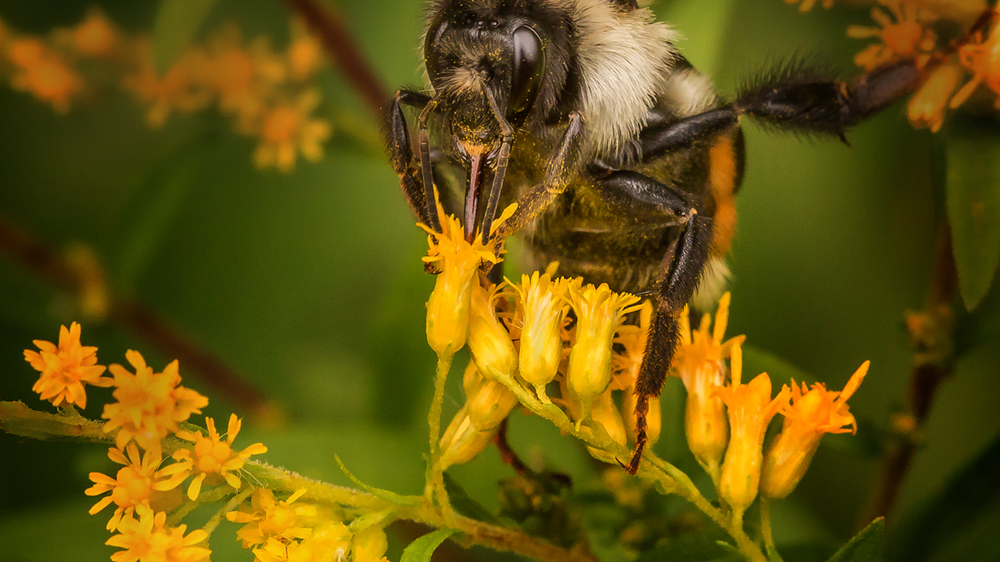 This article was originally published on EcoWatch on November 25, 2015.

Apples, cranberries, squash, sweet potatoes, beans—these are just a few Thanksgiving table favorites, all of which rely on bees for pollination.

And it’s not just honey bees we have to thank for this fruitful service. There are also roughly 4,000 species of native bees in the U.S., such as bumblebees, carpenter bees, alkali bees and squash bees, that serve a critical role in our food supply.

Unfortunately, bees and other pollinators are suffering at the expense of our industrial food system. The loss of habitat and nutritious forage thanks to vast expansions of monocultures like corn and soy is seriously jeopardizing the health and populations of pollinators.

This is worsened by the compounding use of toxic herbicides, insecticides and fungicides, which are building up in our environment, poisoning floral landscapes and contaminating our aquatic ecosystems.

One type of pesticide that’s particularly toxic to bees is a group of nicotine-based insecticides called neonicotinoids, or neonics for short. Neonics are the most widely used insecticides in the world and are systemic chemicals—meaning they are absorbed into all parts of the plant tissue, making the entire plant toxic.

Honey bees and other pollinators are then exposed to these toxic chemicals through pollen, nectar, dust, dew droplets on plant leaves and in the soil where many native bee species nest.

While the harmful impacts of neonics to honey bee populations have been documented in many studies, the unique risks to native bees are less understood. But a recent study by the U.S. Geological Survey (USGS) found pesticide residues, most commonly neonics, in 70 percent of the native bees they tested foraging on or near U.S. farmland, adding to the mounting pile of evidence that neonics are indeed devastating to thousands of species of bees.

By hurting our bees, we are also hurting our food supply. A new study published in Nature last week found that bees exposed to neonics pollinated apple trees far less effectively than bees not exposed to these neurotoxic insecticides. As a result of impaired pollination services, the apple trees visited by the poisoned bees produced apples with fewer seeds—leading to lower overall yields.

But there are other ways that yields can be negatively impacted by neonics too. A study published a few years ago by U.S. Department of Agriculture (USDA) researchers found that neonics indirectly harm the crops they are supposed to protect by killing off beneficial insects that help control crop pests. Just last year, a similar study showed that neonic seed coatings resulted in lower crop productivity with soybeans because it killed off protective insects that kept pests like slugs at bay.

These chemicals are bad for bees, bad for farmers and bad for our agricultural economy, but up until recently, we weren’t sure just how bad they are for consumers. Now, a new study from public health researchers in Japan exposes for the first time evidence of illness in real people as a result of consumption of neonicotinoid residues.

The costs of neonicotinoids clearly outweigh the benefits and there is no excuse for allowing these dangerous chemicals to remain on the market. The state of pollinator health is an indication of our environment’s health—and right now, bees are the canary in the coal mine, sounding the alarm for an unhealthy situation with even bigger problems ahead.

This Thanksgiving, I encourage you to not only give thanks for the incredible services that bees provide, but to also help us take action to protect them. You can start by joining Center for Food Safety in urging the White House to greatly improve their national strategy for protecting pollinators.

Want more ways to show your gratitude for bees? Here are a few suggestions:

Stop using pesticides in your own backyard, especially systemic insecticides such as neonicotinoids.

Create nesting sites. Wild bees need safe habitats and you can create some of your own using wooden blocks or bamboo bundles. Check out this guide from the Xerces Society for examples.

Demand that food companies stop using neonicotinoids. We’re calling on the popcorn companies to stop growing their products with seeds coated in these bee-toxic chemicals. So far, Weaver Popcorn Company has committed to phase out uses of neonicotinoids, but we need more companies to follow in their footsteps.

Support organic. Choosing organic food isn’t just healthier for you than eating food grown with toxic, synthetic agrochemicals—it’s healthier for pollinators and the environment. By choosing organic foods, you help protect pollinators, other wildlife and entire ecosystems. Many organic brands support pollinator protection efforts and are working to reverse the damage that chemically intensive industrial agriculture is doing to the environment.