Fast Food on Drugs: Most Top Chains Fail to Address Antibiotics in their Meat 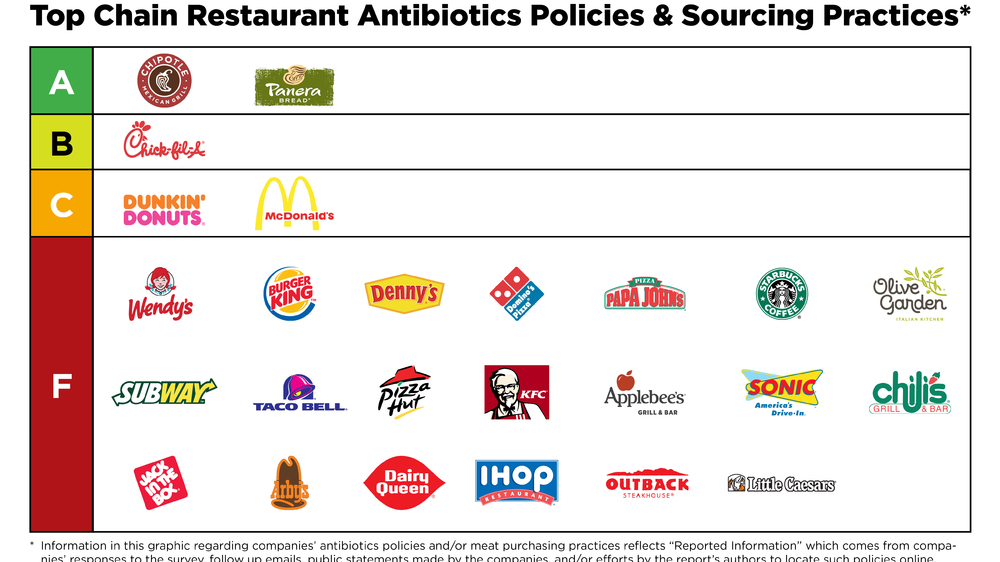 There is now a powerful new tool for consumers looking to make informed, healthy, and responsible choices when it comes to fast food. A group of public health, consumer, and environmental organizations, including Center for Food Safety, have released Chain Reaction, a comprehensive scorecard ranking the United States’ top 25 restaurant chains on their policies regarding use of antibiotics in their meat supply. Unsurprisingly, 20 of the companies received “F”’s, failing to provide a clearly discernible statement or policy on antibiotics through either the survey conducted by the authoring organizations, personal communications, or publicly available reported information. Dunkin’ Donuts, McDonalds, Chick-fil-A, Chipotle Mexican Grill, and Panera Bread, however, all received passing grades, with Chipotle and Panera achieving the only “A”’s.

The scorecard is the latest piece in a growing movement demanding dramatic reductions in the use of antibiotics in animal agriculture due to the connection to the rising threat of antibiotic-resistant infections. The groups also released a letter to the entire restaurant industry, signed by 109 organizations, calling for the elimination of routine antibiotics in food animal production.

Antibiotics are routinely administered to animals raised for food for non-therapeutic reasons, that is, reasons other than to treat a sick animal. The industrialization, intensification, and consolidation of the American food system has brought animals from the iconic natural settings many consumers still picture, into factory style operations that confine thousands of pigs and cows and millions of chickens indoors. Animals in these systems are bred for rapid growth rates rather than health, and are kept in crowded, poorly lit, stressful, and unsanitary conditions. Giving low doses of antibiotics through the animals’ daily food or water intake stimulates growth while requiring less overall feed consumption; in other words, they will get fatter while eating less food. This strategy also mitigates the spread of disease and bacteria that would otherwise flourish in such appalling environments. Routine dosages are therefore not about health, but about profit—raising as much meat with as few resources as possible—reflective of the unsustainable approach that currently dominates animal agriculture in the US.

The companies that received passing grades have made important commitments that have the potential to reduce the shocking amount of antibiotics currently used in food animal production. However, as CFS has previously argued, singular emphasis on the misuse of antibiotics will not guarantee critical, root changes to an unsustainable and ultimately failing system. While industrial animal production has relied heavily on antibiotics to get to this point, eliminating their routine use does not guarantee that other growth promoting drugs and chemical sanitation measures will not take their place, allowing the horrific conditions and poor welfare practices to continue unabated.

Non-antibiotic growth promoting drugs, like beta-agonists or synthetic hormones, are routinely used to boost productivity, but there is insufficient information on their potential impacts to animals, the environment, workers, or consumers. The beta-agonists ractopamine and zilpaterol, for example, have been understudied. However, the minimal scientific research available has demonstrated that the drugs have horrendous effects on the animals to which they are given, including linking ractopamine to hyper-aggression, rapid heart rates, and organ damage, and connecting zilpaterol to higher rates of mortality and sick or injured animals. Fewer studies are available on their impacts on humans and the surrounding environment, despite the fact that ractopamine residues have been detected on meat in retail stores as well as in groundwater near livestock operations due to manure.

Animal factories create millions of gallons of manure, which is commonly stored in enormous pits or lagoons until it can be transported off-site or applied to fields. The tremendous, unmanageable amount of manure creates significant air and water pollution problems. Nutrients from the manure pollute local ecosystems, posing particular threats to waterways from leaching into groundwater during storage or from runoff when applied to fields. A community nearby a Smithfield pig factory in Virginia is in the process of a multimillion-dollar relocation , moving citizens away from the hazardous “noise, odor, and dust.” The manure may also contain residues of drugs administered to the animals. In addition to ractopamine mentioned above, studies have measured increased hormone levels in waterways near animal factories that decreased with greater distance from the feedlot sites.

Whether contaminating local waterways or the meat on retail shelves, it is clear that animal drug residues are prevalent and persistent in our environment. As another example, numerous cocciodostats—a group of drugs that prevent against an intestinal parasite that is transmitted via regular contact with feces—have been detected on animal products on market shelves and little is known about their effects on the people eating those products. Despite their ubiquity, the industry and the Food and Drug Administration have provided little information to the public on the impacts of their use and exposure. CFS has consistently demanded greater transparency in food animal production, fighting for the public’s right to know how their food is produced, from petitioning for the review of approved drugs to challenging laws that would criminalize exposing conditions on factory farms.

In order to protect the health and wellbeing of humans and animals alike, the way we perceive animals and how we raise them for food has to shift dramatically. This shift is beginning, and consumers are growing increasingly aware that choosing responsibly, sustainably, and humanely raised meat and animal products is better for their health and their environment. They are demanding that the restaurants they patronize take significant steps to reform their own meat procurement practices, and set a high bar of integrity for the industry as a whole. Chain Reaction aims to provide a simple tool for consumers to make food choices that align with their values. The scorecard will be updated annually to reflect the most current information.

As the market shifts to respond to our concerns, it is critical that these companies are held accountable for their own commitments. Consumers and the government alike have a role to play in ensuring that they put their money where their mouths are. Tell the restaurants, regardless of their score, that you will be paying attention to make sure they take meaningful, concrete steps to implement strong policies and fulfil their sourcing commitments. And, to truly protect human health and to develop a safe meat industry, we’ll need more than just proclamations of good intentions; we’ll also need mandatory, enforceable policy changes. Tell FDA to institute stronger regulations regarding animal drug approvals, and to review drugs currently on the market for risks to human health, animals, and the environment.