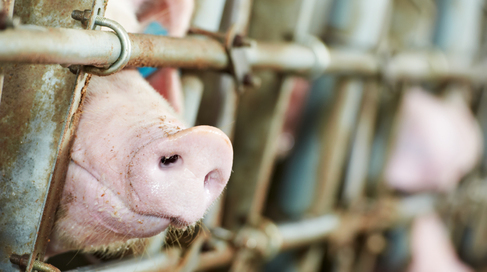 Ag-gag laws have become an increasingly prevalent way for factory farms and slaughterhouses to hide unsafe, inhumane animal treatment practices. But yesterday, a federal judge declared that Idaho’s ag-gag law is unconstitutional because it violates the First Amendment and the Equal Protection Clause of the U.S. Constitution by suppressing speech that criticizes factory farms. The legal challenge was brought by a broad-based public interest coalition of national and local nonprofits, including Center for Food Safety (CFS), the Animal Legal Defense Fund (ALDF), People for the Ethical Treatment of Animals (PETA), and the American Civil Liberties Union (ACLU) of Idaho.

Idaho’s ag-gag law criminalized whistle-blowing activities at agricultural facilities, such as factory farms and slaughterhouses, including audio and video recordings of dangerous food safety and appalling animal welfare violations. Anyone convicted of this conduct could face up to a year in prison or a $5,000 fine. Ag-gag laws are, unsurprisingly, notoriously unpopular with the public. Nationwide thirty-two similar ag-gag measures have failed to pass. But seven other states have ag-gag laws on the books and more states, under pressure from the livestock and poultry industries, continue to try. This makes yesterday’s court decision all the more important.

In his ruling, Judge B. Lynn Winmill explained that “Although the State may not agree with the message certain groups seek to convey about Idaho’s agricultural production facilities, such as releasing secretly recorded videos of animal abuse to the Internet and calling for boycotts, it cannot deny such groups equal protection of the laws in their exercise of their right to free speech.” In other words, the government can’t criminalize Constitutionally-protected speech and silence whistleblowers just because it wants to protect a profitable industry for the state.

The undercover video and photography that ag-gag laws attempt to block have exposed numerous and shocking “industry standards.” These pervasive, systematic procedures include routine mutilation such as debeaking birds with electrically-heated blades and castrating male animals by slicing open their scrotum and ripping their testicles out without pain relief or anesthesia. These animals are then kept in intensive confinement, unable to turn around for months on end. Exposés have also detailed the sickening farming conditions that result in contaminated meat products that pose serious health risks to the public, as well as life threatening conditions for farm workers.

While much of the discussion around ag-gag laws focuses on animal welfare, the laws also seriously threaten our food safety by seeking to stop investigative activities that could keep contaminated food off the market. Three thousand consumers are killed and 48.7 million are sickened each year from ingesting foodborne pathogens. Beef, poultry, and eggs are some of the worst offenders. In 2009 and 2010, eggs tainted with Salmonella were responsible for the most food-related illnesses, and beef and poultry were ranked as the first and fourth commodities most often associated with pathogen outbreaks.

In 2007, an investigator for the Humane Society of the United States documented “egregious” violations of federal regulations at the Hallmark/Westland cattle slaughtering plant in California.  The investigator filmed downer cows being pushed with heavy machinery, electrically shocked, and finally dragged to slaughter. As a result of this investigation, officials from the United States Department of Agriculture (USDA)’s Food Safety and Inspection Service admitted they often took shortcuts when inspecting cattle before slaughter. This led to one of the largest beef recalls in U.S. history. In 2009, a hidden camera in a veal slaughtering plant documented a USDA inspector’s failure to shut down the plant after witnessing a worker attempt to skin a live calf that had somehow ended up with the slaughtered calves.

These investigations, and the subsequent media coverage, have led to food safety recalls, citations for environmental and labor violations, evidence of health code violations, plant closures, criminal convictions, and civil litigation. If ag-gag laws are allowed to stand, all of this crucial information would be shielded from the public eye, allowing the industry to continue to violate the law with little to no scrutiny.

As Judge Winmill astutely noted in his ruling, “[A]s the story of Upton Sinclair illustrates, an agricultural facility’s operations that affect food and worker safety are not exclusively a private matter. Food and worker safety are matters of public concern.” He goes on to say, “Protecting the private interests of a powerful industry, which produces the public’s food supply, against public scrutiny is not a legitimate government interest.”

Without the ability to witness, expose, and critique some of the nation’s most powerful industries, we are all vulnerable. This latest ruling affirms our right to call out abuse and change this system from the inside. The court’s decision is an invaluable tool that will directly save lives.