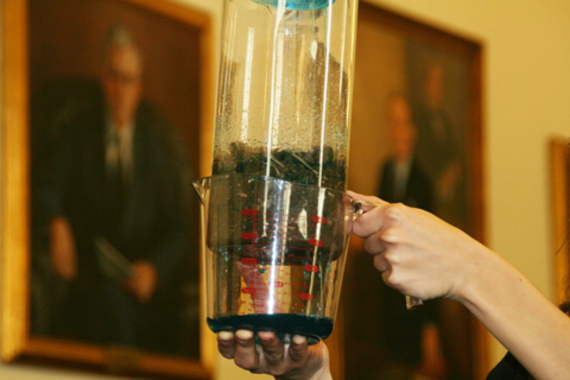 April in Washington D.C. is a sea of petals. Visitors come from around the country, and indeed the world, to see pink and white cherry blossoms gracing the Tidal Basin and visit monuments lined with banks of variegated tulips. In the midst of all this beauty, it’s easy to overlook the fact that the font of its profusion lies hidden below ground in the soil. But, on Monday April 13th the soil finally got its due and took center stage on Capitol Hill.

With the sponsorship of Congressman Jared Huffman (D, CA) Center for Food Safety (CFS) held a Congressional Briefing on soil health and its ability to mitigate climate change. The event included an illustrious group of speakers. Dr. Kris Nichols, Chief Scientist at the Rodale Institute, started off the morning by describing the interactive “carbon economy” taking place underground.  Plants, she explained, trade carbon that they capture via photosynthesis with soil fungi and bacteria in exchange for minerals and other nutrients. Nichols went on to outline principles for soil health that included minimizing disturbance such as tillage (akin to taking a “wrecking ball through little microbial towns”), keeping soils covered to protect them from temperature fluctuations and compaction from heavy raindrops, and managing animals to provide soil fertility.

Vermont-based grazier and consultant Abe Collins then described how photosynthesis can pump carbon back into the soil resulting in the creation of new topsoil. In healthy functioning systems he has seen up to eight inches of new topsoil form.  Collins stressed the importance of soil aggregates (i.e., structure) for "water infrastructure” and stated that “growing topsoil is growing water security.” His words resonated with the California contingent in the room as we are all too familiar with water scarcity. After working on this issue for 20 years, Collins believes that the technology we now have to monitor and provide feedback to land managers and governments is of primary importance to restoring and indeed enhancing soil carbon systems.

Chris Lawrence, a representative of the Natural Resources Conservation Service’s (NRCS) Virginia branch, performed soil function demonstrations that drove home the previous remarks. When rain was simulated, poorly managed soil, which lacked structure, demonstrated low water absorption rates and resulted in muddy runoff. By contrast, the healthy soil, which had soil aggregates and was less compacted, absorbed the water like a sponge. Lawrence’s colleague Dr. Wayne Honeycutt, also with NRCS, outlined some of the agency’s current initiatives. The agency, which after all began as the Soil Conservation Service, is getting back to its roots and working with farmers and ranchers around the country to implement practices known to improve soil health.

During the Briefing, documentary film-maker Deborah Koons Garcia, who has shown her beautiful film “Symphony of the Soil” to audiences around the world (and who showed segments of the film later that evening in the Congressional Theater), reminded us that soil is a living and diverse organism. In her remarks, Koons Garcia highlighted the substantial difference between regenerative organic practices and industrial agricultural practices on soil function and health.

I closed the Briefing by putting the wealth of information in the context of our global climate challenge. Even if we miraculously stopped emitting carbon into the atmosphere tomorrow, we’d still have exceeded our atmospheric carbon budget by over 50 parts per million. Recognizing the fundamental importance of healthy soil to our national well-being will help us solve the growing problems of both food and water security. Rebuilding soil carbon will take this excess CO2 out of the atmosphere where it causes the climate problems and put in the ground where it is the solution.

Center for Food Safety looks forward to working with Congress to not only protect and preserve soil health around the country but to help incentivize conditions that improve it.