Monsanto or Monarchs: The Choice is Ours 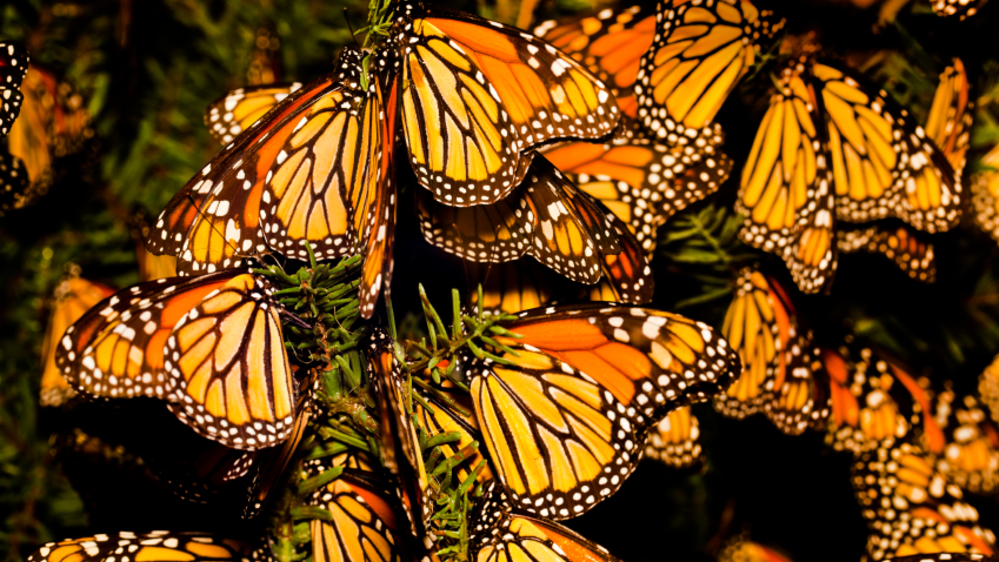 Monarch season has officially arrived, and if you’re lucky, you may be one of the few fortunate enough to witness these iconic butterflies taking off for their winter migration. The extraordinary voyage of the Monarchs is a spectacular sight that we may not be able to share with future generations thanks to emerging threats to this fragile species. The sad truth is that our Monarchs are in serious trouble – like bees, they’ve become victims of industrial agriculture.

Throughout November, hundreds of millions of Monarch butterflies travel south to Mexico to spend the winter in a small mountaintop forest region. These mountain sanctuaries provide the unique conditions Monarchs need to survive the winter. But Mexico’s mountaintops are a sanctuary for Monarchs for only half the year. The other 7 months or so, Monarchs must struggle, constantly searching for fields of milkweed flower for both breeding and food. Unfortunately, the current agricultural landscape in the U.S. is anything but a sanctuary thanks to the widespread use of Monsanto’s Roundup Ready™ genetically engineered (GE) crops.

Never one to miss an opportunity to green wash their environmentally destructive practices, Monsanto has been working hard this year to deceptively paint themselves as a protector of pollinators: from their 2013 “Bee Health Summit” to the recent partnership with the Clinton Global Initiative on a “commitment to honey bee health” to engineering a “killer molecule” to fight mites in bees. Meanwhile, as these bee PR stunts sought to fool the public and occupy the media’s attention, another pollinator catastrophe directly related to Monsanto’s products has been brewing in the background: the decimation of Monarch butterflies.

Have you noticed that there seem to be fewer butterflies recently? Your observations are spot on. 2012 was the worst year yet for North American Monarch populations, which were at the lowest level since record-keeping began.[i] The decline in Monarchs in North America has coincided with the rapid expansion of Monsanto’s Roundup Ready™ corn and soybeans. The connecting culprit? The herbicide glyphosate (or Roundup™), now the most widely used pesticide in U.S. agriculture. It’s also the world’s best known killer of milkweeds.

Milkweed, manna of monarchs, is the enemy of industrial-scale monoculture farming. The sole source of food for monarch larvae is this broadleaf perennial flower, the type of flower that chemical herbicides like Roundup™ are designed to destroy.  As corporate farms have expanded their use of chemical killers from companies like Monsanto, milkweeds have been decimated. In fact, researchers have recently estimated that the number of milkweeds in agricultural fields in the Midwest has decreased by 98.7% between 1999 and 2012.[ii]

Just how bad is Roundup for milkweed and the Monarchs? Here’s one way of looking at its powerful capacity to kill: milkweed has thrived for hundreds of years, even as American agriculture has expanded to become the world’s bread basket. But thanks to Monsanto and friends, in Midwestern agricultural fields, milkweed has been nearly wiped out in less than two decades.

While many of us enjoy the simple beauty of monarchs, their health as a species is more than pure aesthetics. The plight of pollinators is a visible indicator for alarm over our environment’s health; they are the canaries in the coal mine. Monarchs and bees are not the only species suffering at the expense of chemical companies’ profits; they are just the tip of the iceberg. One out of every three bites of food we eat requires pollinators, and without them, our food supply— and we—will be in serious trouble. Instead of continuing on with agri-business as usual, perhaps we should pause, reconsider, and take the hint from Monarchs that our industrial food system is failing us.

The question is quite simple: do you want Monsanto or Monarchs?  We can’t have both, and the choice is ours.

[ii] Pleasants (in press), Monarch Butterflies and Agriculture, Ch. 14 in: "Monarchs in a Changing World: Biology and Conservation of an Iconic Insect" Cornell Univ. Press